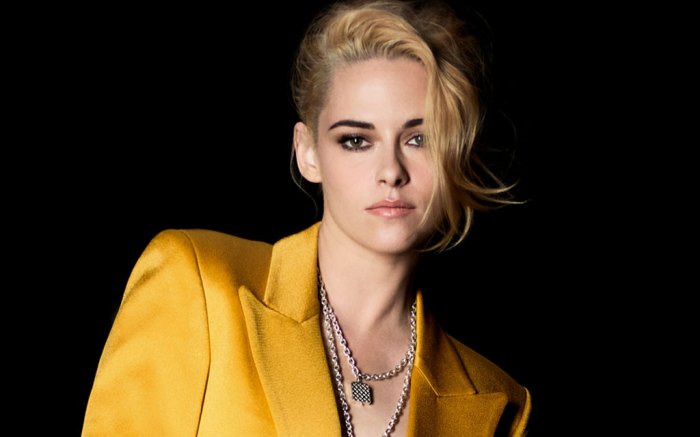 Kristen Stewart brought bright yellow to the colors of the rainbow-themed outfits on the cover of The Hollywood Reporter.

For the shoot, Stewart suited up in a monochrome set in cyber yellow. The ensemble consisted of an open double-breasted blazer and a pair of matching, high-waisted suit trousers. On her feet, she kept it classic in a pair of white patent leather pointed-toe pumps, which gave the star some height with the thin heel. The look was accessorized with two layered silver chain necklaces with square-shaped pendants.

When joined by the other actresses for the cover, Stewart slipped into something a little more comfortable and matched the same suit with a pair of black Chuck Taylor All-Star Low Top sneakers. The shoes retail for $55 on the Converse website. The black shoes were contrasted with a pair of bright white ribbed socks.

Each of the stars featured in the story are leading the award season buzz. Stewart discussed her portrayal of Princess Diana in Pablo Larraín’s “Spencer,” which was released on Nov. 5. She made note of the similarities between herself and Princess Diana both having lived under the microscope while in their 20s.

“It seems like the clearest parallel — there were a lot of cameras in our lives — but the reason they were there is so different. I’m not running from anything; I’m running toward everything. This person wasn’t even allowed to be a person.” Stewart said.  “So, I know what it’s like to assume — sometimes wrongly — that everyone’s looking at you when you walk into a room.”