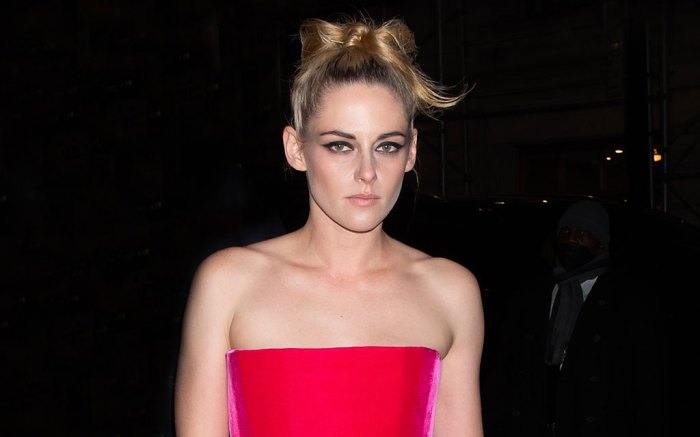 The “Spencer” actress looked punky in pink at the award show. She sported a stunning strapless gown that featured a corset top with a cinched waist and maxi skirt that draped down to her feet. The dress also featured a slit that ran up the side of her leg. Stewart let the fitted frock speak for itself and only accessorized with a few silver rings. She also fashioned her hair into a bow shape.

The 31-year-old matched the dress with a pair of Tamara Mellon’s neon sandal heels. The Frontline style featured three straps that ran across her toe bed, the middle of her foot and her ankles.

Stewart received this year’s performer tribute at the ceremony thanks to her portrayal as Princess Diana in the new film “Spencer.”

When it comes to Stewart’s red carpet style, she is not afraid to stand apart from the crowd with her head-turning looks. Last month at the LA premiere of “Spencer,” the star stunned in a two-piece Chanel set. The look, which came courtesy of the brand’s fall ’21 couture lineup, featured a satin black bandeau and a sheer-paneled skirt with tiered lace trim.

As for Stewart herself, the American star’s style can be considered a twist on punky edge, oftentimes opting for darker pieces from brands such as Dr. Martens, Vans, Malone Souliers and Thom Browne amongst other major labels. Dipping her toes into the high fashion world, Stewart signed on as an ambassador for Chanel beauty in 2016 and has since appeared in a series of ad campaigns for the brand on top of continuously sitting front row at all the label’s runway shows.