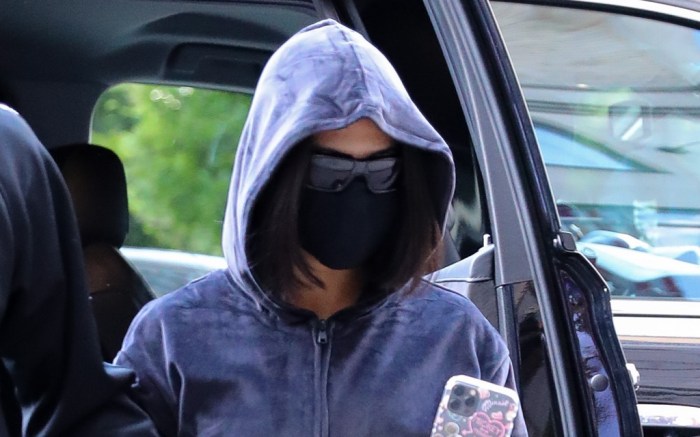 While arriving with beau Travis Barker, Kardashian stepped out in a black sweatsuit. Her velour set featured a zip-up sweatshirt and matching pants. She accessorized with a black face mask, as well as sleek black sunglasses and black leather Hermès Birkin bag. With her hood up, the media personality was the image of the “incognito” look. Barker cleverly matched her ensemble, wearing his own black sweatsuit, face mask and sunglasses paired with black Nike sneakers.

When it came to shoes, the Poosh founder stuck to a trusty favorite: her go-to Prada boots. The Monolith style, which has become one of the most popular looks of the year, featured a lace-up silhouette and thick chunky lug soles. Her footwear added a utilitarian edge to the outfit, taking it from simply comfy to edgy and practical. Her boots begin retailing at $1,390 at SaksFifthAvenue.com.


Lug-sole footwear has grown in popularity this year, due to its tough outer appearance and practicality for daylong wear. The thick soles are often ridged and textured, allowing for smoother traction when walking around — as well as bringing pieces from a T-shirt and jeans to feminine dresses a punky edge. Kardashian isn’t the only star who’s caught onto the trend; celebrities like Emma Roberts, Hailey Baldwin and Irina Shayk have also worn lug-sole footwear by Valentino, Bottega Veneta and Dr. Martens this summer.

The former “Keeping Up with the Kardashians” star has a wide variety of shoes in her closet, often featuring edgy and trendy accents. Kardashian often wears sharp pumps, sandals and boots by Tom Ford, Bottega Veneta, GCDS and Giuseppe Zanotti. On the casual front, she can be spotted in sneakers by New Balance, Marni, Converse, and Veja as well.

Click through the gallery to see Kardashian’s best shoe styles over the years.