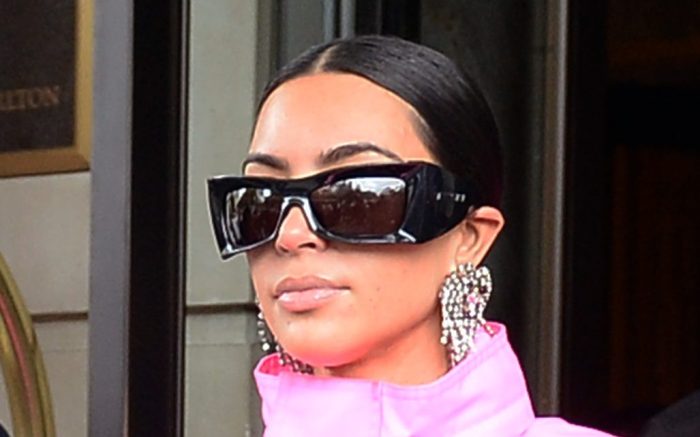 Kim Kardashian was spotted in a pink and glittery ensemble leaving the Ritz Carlton hotel in New York along with Kanye West.

While everyone awaits the TV star’s “Saturday Night Live” debut, Kardashian has been posting several sneak peeks ahead of the show. Before heading to NBC studios, the media mogul donned a puffy pink coat from Balenciaga, pink gloves, crystal-encrusted earrings and a pair of glittery pointed-toe boots featuring an iridescent finish. She also added a silver Balenciaga Hourglass handle bag for extra glamour.

However, this is not the first time Kardashian recently opted for a pink outfit. Earlier this week she chose a head-to-toe pink ensemble with a matching pair of boots featuring pointed toes and a thigh-high silhouette.

Lately, Kardashian has been seen in different boot designs. From black leather thigh-high boots to Balenciaga’s Knife boots, the TV star is always mixing high-end footwear with bold outfits. Even though she recently filed for divorce, Kardashian still supports Kanye West’s Yeezy collections for footwear and apparel, including sneakers.

Many celebrities like Dua Lipa and Gwen Stefani have been spotted lately in knee-high and thigh-boots with glittery motif and decorative elements. This style has been predominant during fall and will continue to make an appearance throughout the season. Other high-end brands Kardashian favors include Balmain, Amina Muaddi, Maison Margiela and Bottega Veneta.

While she is well-known in the TV industry, she also dips her toes in retail. She created her Skims shapewear line in 2019, featuring a mix of inclusive and affordable designs offering loungewear and underwear as well. Additionally, the reality star also founded her own makeup line, KKW Beauty.

See more of Kim Kardashian’s style over the years.