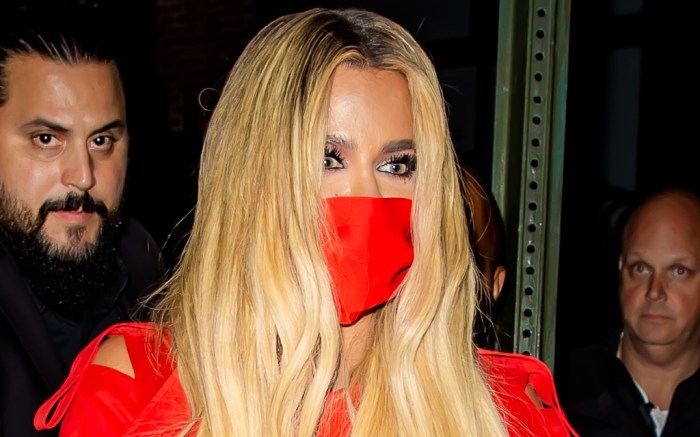 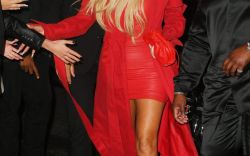 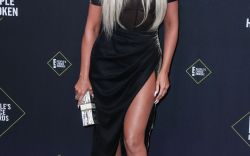 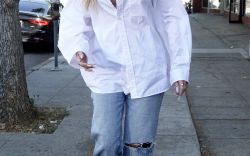 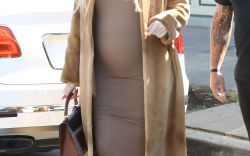 Khloe Kardashian brought a bold take to monochrome dressing with her latest look, seen at the “Saturday Night Live” afterparty at Zero Bond in New York City hosted by her sister, Kim Kardashian.

The media personality stepped out for the event alongside Scott Disick, wearing a red leather dress by LaQuan Smith. The number featured a miniskirt, as well as a one-shoulder silhouette with a single off-the-shoulder sleeve. Kardashian layered against the fall chill in a matching red trench coat, which featured shoulder cutouts and buckled cuffs. Her look was complete with a coordinating face mask, as well as a leather clutch by Bottega Veneta.

Kardashian gave her outfit a fully monochrome effect with Christian Louboutin pumps. Her pointed-toe pair featured crocodile embossments, as well as stiletto heels totaling at least 4 inches in height. When paired with her dress, the pumps made Kardashian’s look instantly streamlined—and gave it an added edge from their reptilian accents.


However, Kardashian didn’t just wear one sleek pair of shoes during the course of the evening–she wore two. Following the afterparty, the Good American founder changed into comfy Nike sneakers. The high-top style featured beige and metallic brown uppers, as well as iridescent green tongues and slick side straps that Kardashian left untied.


Monochrome dressing has become one of this year’s go-to styling hacks for numerous celebrities, due to its effortless nature. The maneuver involves pairing clothing and footwear in the same colors or prints for a streamlined, sharp look. Kardashian isn’t the only celebrity to turn to the style trick; her sister, Kim, has also been seen in single-tone outfits by Balenciaga over the last several weeks. Stars like Rita Ora, Dakota Johnson and Demi Moore have also been spotted in monochrome looks by Vera Wang, Rodarte and Versace’s collaborative Fendi line in recent weeks.

Kardashian’s shoe style often matches her sleek wardrobe. The former “Keeping Up with the Kardashians” star frequently wears pumps by Louboutin, one of her go-to brands, as well as heels from Amina Muaddi, Cult Gaia and more top brands. Her off-duty and gym looks often incorporate chunky sneakers from Nike, as well as shoes from former brother-in-law Kanye West’s Adidas Yeezy line.

Elevate your next look with bold pointed pumps.

Click through the gallery for more of Khloe Kardashian’s street style over the years.