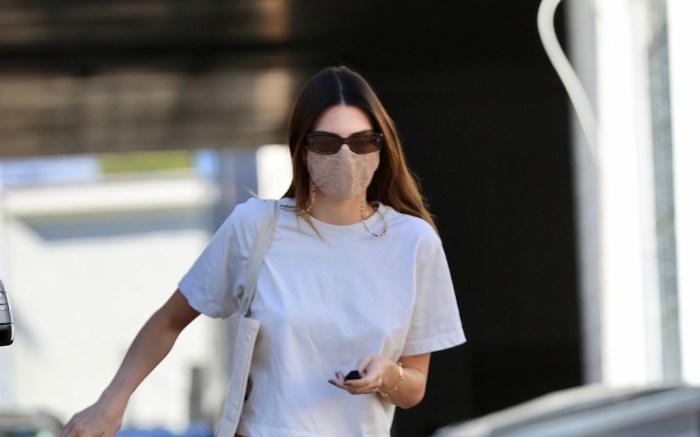 Kendall Jenner stepped out for lunch in Los Angeles on Thursday, wearing an easy-to-copy classic look.

To grab a bite to eat, Jenner opted for an easygoing aesthetic with a white t-shirt and tan jeans. The denim offered a trendy straight-leg silhouette and sat at the model’s waist. Jenner accessorized with rounded sunglasses, gold jewelry and beige face mask that was equipped with beaded straps. The “Keeping Up with the Kardashians” star also wore a canvas shopping bag.

As for footwear, Jenner made a surprising sneaker choice. While she often opts for buzzy collabs and designer shoes, including Off-White x Nike sneakers and looks from Kanye West’s Adidas Yeezy line — the model sported a pair of Converse Chuck Taylor All Stars today. The low-top shoes feature canvas uppers in a natural ivory colorway.


The silhouette, which was first introduced as a basketball shoe, has become must-have look for athletes, celebs and even Vice President Kamala Harris.

Jenner’s lunch sighting comes after she was spotted grabbing dinner at Craig’s in Los Angeles with Hailey Baldwin and Justin Bieber in a much more dressed up look earlier this month.

To Buy: Chuck Taylor All Star in Natural Ivory, $50

For the night out, Jenner wore Khaite’s Maddy Ribbed Knit Top, which retails for $1,080 with sleek fitted black pants. For footwear, Jenner chose black knee-high boots. The footwear appears to be By’s Far Stevie 42 boots. The shoes are currently on sale from $726 to $508 on shopbop.com.

When it comes to her personal style, Jenner leans on the classic side. Her favorite looks include basics paired with statement coats and eye-catching footwear. She isn’t afraid of mixing patterns and prints and plays around with textures like leather and even latex. Other brand she likes include: Celine, Prada, Dr. Martens and Uggs.

Click through the gallery to see Kendall Jenner’s style evolution.