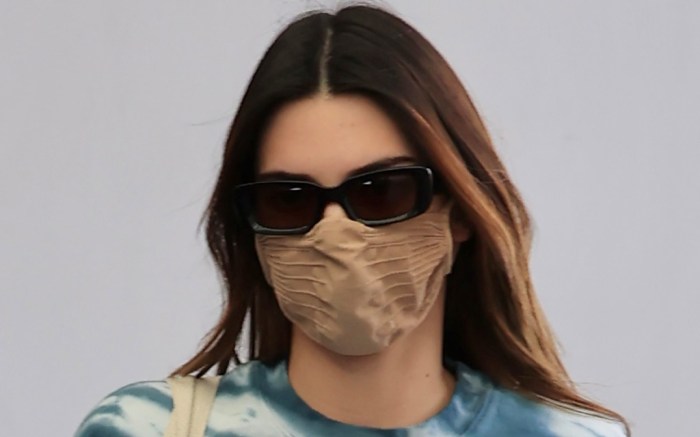 Kendall Jenner continued to make a case for this disputed footwear styling trend as she stepped out in Los Angeles this week.

The supermodel made her way into a meeting on Wednesday with off-duty flair, opting for a blue tie-dye crewneck sweatshirt to kick off her look; the $85 cozy look comes courtesy of her sister Khloe Kardashian’s Good American label.

Kendall then continued to support her family with her comfortable athleisure attire in classic black leggings and an $8 face mask from Kim Kardashian’s Skims shapewear collection, available at Skims.com.


For shoes, Kendall rounded out the family-friendly look by tapping her brother-in-law Kanye West for a comfy style. The recognizable Adidas Yeezy slides feature the style’s distinctive shark-tooth sole, along with a thick upper band and a chunky footbed.

The styles originally were released in December 2019 but recently rereleased at YeezySupply.com in three colorways. The adult, infant and kids’ sizes of Kendall’ss “Bone” iteration are all currently sold out across the market; though they once retailed for just $55, you can now find the adult silhouette on StockX.com anywhere from $292 to $457.


Footwear fans go back and forth on their thoughts on socks and sandals. While the combination is considered disharmonizing by some, others prefer the layering as it allows you to wear your favorite open-toe designs year-round. Brands like Fendi, Anna Sui, Simone Rocha and more included socks and sandals together in their recent runway shows — and you can even find Justin Bieber, Halle Berry, Ariana Grande and Kanye West rocking their own takes on the disputed footwear combo.

Kendall herself opted for the pairing earlier this week when she stepped out for a pilates class with Hailey Baldwin in Los Angeles.

You can oftentimes find the “Keeping Up With the Kardashians” star in a selection of trending shoes. The supermodel’s closet often includes more of an edgy, tomboyish touch, adding in pieces like chunky Prada combat boots and Dr. Marten brogues. Still, the older Jenner sister appreciates a trending sneaker just like her youngest sibling, Kylie Jenner, previously stepping out in a mix of unreleased styles and buzzy pairs from Nike, New Balance, Off-White and more.

Click through the gallery to discover more of Kendall Jenner’s chic style evolution over the years.