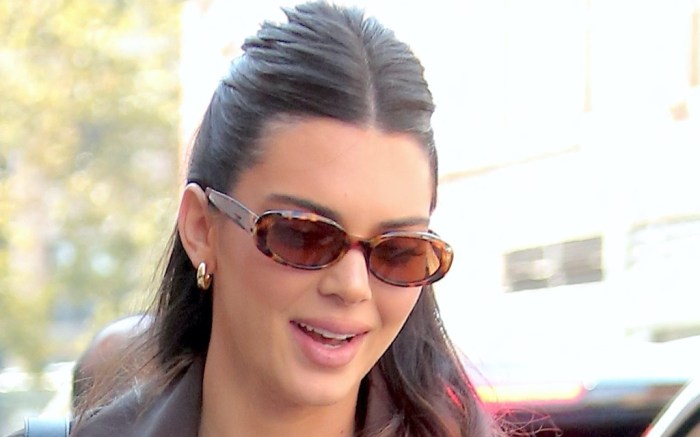 The supermodel stepped out in a slightly oversized brown trench coat with black buttons. The versatile outerwear piece was paired with similarly classic basics: a gray T-shirt and blue jeans. When worn together, the look utilized neutral tones to create an outfit that was sharp, simple and could be from any decade. Jenner also wore versatile accessories, including gold hoop earrings, tortoiseshell-rimmed sunglasses and a black leather tote bag.

When it came to shoes, Jenner’s footwear was equally classic. The FWRD creative director wore a pair of black leather boots with rounded toes and short heels, which appeared to total under 2 inches in height. Her shoes smoothly paired with the black accents in her outfit, bringing an effortless appearance that could be worn with any ensemble.


Now that fall has arrived, boots are back in most people’s shoe rotations. Whether ankle or knee-high, the style has returned due to its coverage against chillier temperatures and ability to be easily layered. In addition to Jenner, stars like Kourtney Kardashian, Rita Ora and Rosie Huntington-Whiteley have also worn black boots from brands like Gia Borghini, Vera Wang and Naked Wolfe in recent weeks.

For footwear, the former “Keeping Up with the Kardashians” star typically wears a variety of both classic and trendy styles. For events and formal appearances, Jenner regularly dons strappy sandals and mules from brands like Amina Muaddi, Bottega Veneta and Saint Laurent. For off-duty moments and casual ensembles, she can be spotted in Nike and Converse sneakers, Simon Miller and Birkenstock sandals, and a range of boots from brands like Khaite, The Row and Stella McCartney.

Click through the gallery to see Jenner’s style evolution over the years.