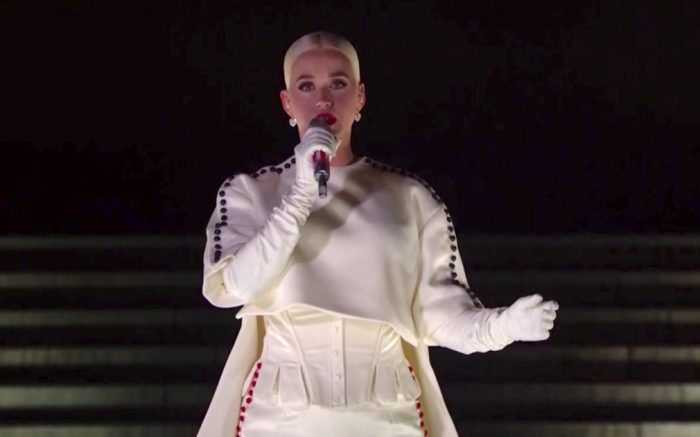 For the milestone moment, Perry performed her hit song “Fireworks,” dressed in an elegant white cape gown by Thom Browne that was adorned with red and blue jewels. The dress also featured a cinched waist, giving off a structured silhouette.

Making the ensemble all the more sleek, Perry styled her hair in a neat bun and accessorized with pearl earrings. As for footwear, Perry opted for white heels from Jimmy Choo. Called the Rene Pump, the shoes are designed with a pointed toe and feature a mid-high angular heel. Perry’s style retails for $625 at Farfetch.com.

It was a big day for Jimmy Choo. Vice President Kamala Harris also opted for pumps from the brand while speaking during the special program. Earlier in the day, Jennifer Lopez sported Jimmy Choo’s Max Platform Sandal for her performance at the inauguration and First Lady Jill Biden showcased the fashion house’s Romy Pump with her Swarovski crystal-coated tweed coat from Markarian.

President Joe Biden and Harris’ inauguration made history today for a myriad of reasons. Biden is the oldest person ever sworn in as president while Harris is the first-ever female vice president of the United States. The daughter of Jamaican and Indian immigrants, she is also the first Black person and first person of South Asian descent to serve in the second-highest office. She joins President Joe Biden in leading a country left on the edge of its seat following the second impeachment of current President Donald Trump by the House of Representatives last week.

Click through the gallery to see more looks from the 2021 presidential inauguration.