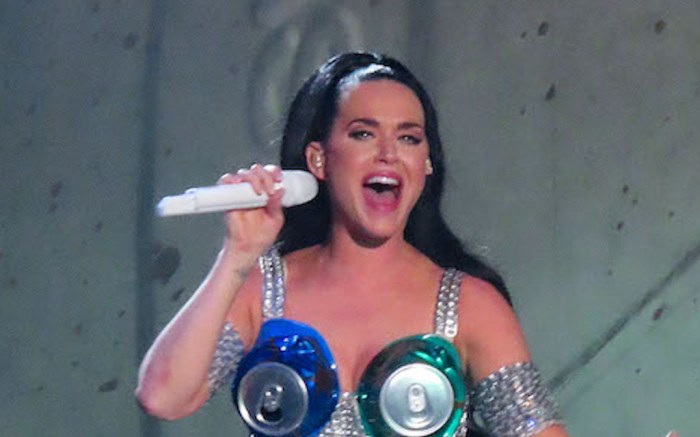 Katy Perry brought the imagination and drama to the first show of her Las Vegas residency, Play.

The “California Girls” singer kicked off her concert at Resorts World Theatre yesterday, featuring her singing some of her greatest hits from the course of her decade-long career. Some of the songs she had on her setlist for the night, and future shows, include “E.T.,” “Chained To The Rhythm,” “Swish Swish,” “Teenage Dream” and “Roar.”

For the first night, Perry donned an imaginative silver mini dress that incorporated multicolored beer cans on a bralette, which added that special Perry flair while also lending some elevation to her set. The garment also featured straps that offered extra security and support.

When it came to footwear, Perry ruled the stage in a pair of silver knee-high platform boots, which unified her glitzy attire. The chunky heel of the boot helped the pop star remain stable as she hit her choreography.

Perry is known for having a kitschy and unique fashion sense that over the years prompted her to wear a hamburger suit to the Met Gala, a whipped cream bra and a Christmas tree. When she’s not on stage, she can be found on Instagram and the streets alike, wearing edgy dresses, slouchy T-shirts and intricate denim pieces that are considerably toned down for the singer.

The “Pendulum” singer has ventured into the fashion industry. She has her namesake shoe line that sells silhouettes like pumps, sandals and flats that all have a little bit of Perry magic to make them special.

Put on a pair of silver knee-high platforms and add a futuristic twist to your outfits.

Flip through the gallery to see Perry’s chicest street style moments over the years.

To Buy: Shoe Dazzle Tilley Stiletto Over The Knee Boot, $26.