Katie Holmes Makes a Case for Menswear-Inspo in Relaxed Trousers, White Button Down and Gucci Loafers 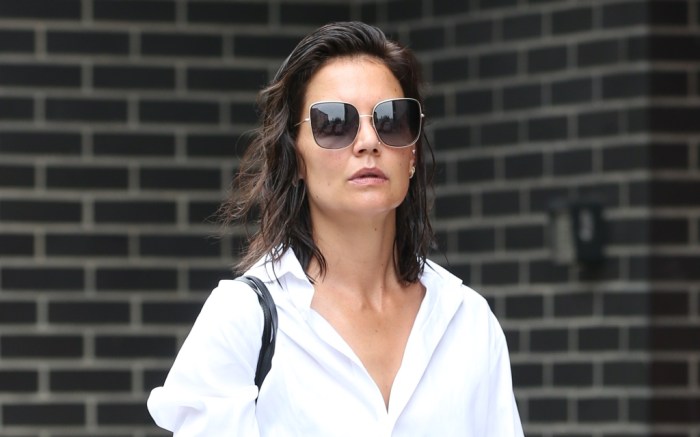 Katie Holmes found the perfect way to wear fall trends at the end of summer.

The actress was in NYC on Tuesday in a simple yet stylish summer-to-fall transition look. She paired oversized rust-colored trousers with an oversized white button-down. Though the oversized look can make some outfits look baggy and messy, Holmes pulled it off. She added dark sunglasses, a white face mask around her wrist and a large black tote that she’s been seen adding to her recent looks.

Billowy, sometimes boxy menswear-inspired silhouettes have become a staple for Holmes in the past few years. She frequents oversized blazers, overalls and slouchy low-rise jeans.

Her black loafers played into the overall menswear look of the ensemble. Her Gucci loafers, which retail for $830, added both masculine and classic touches to the rest of the outfit. The loafers feature the traditional style with gold hardware across the upper and a signature Gucci red and green web.

From high-end designers like Prada to more affordable brands like Dr. Martens, loafers are making a comeback on the celeb style scene. The classic silhouette offers a polished point between a ballet flat, a combat boot or a slip-on sneaker. Stars like Hailey Baldwin, Bella Hadid and even first lady Jill Biden have frequented their own choice of loafers this spring and summer.

When the “Dawson’s Creek” alum is not being photographed in her off-duty style and showcasing her impeccable footwear taste, she also has served as the face of Olay, Bobbi Brown Cosmetics, Ann Taylor, Miu Miu and more top brands over the course of her career in addition to her television and film acting roles.

To tap into your own menswear style, add a loafer like Holmes’ to your rotation.