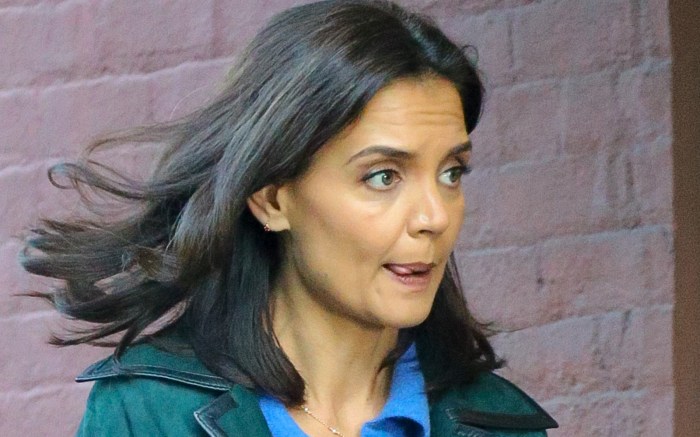 Katie Holmes was bursting in blue when she was spotted with co-star Julia Mayorga filming “Rare Objects” in New York yesterday. The “Dawson’s Creek” actress and her co-star were wearing outfits that were semi-casual while having interesting pops of color. For Holmes’ ensemble, she wore a blue flowy sweater from Tibi that featured a deep V-neckline paired with a flowy cream skirt that added a perfect touch of contrast, and a green Khaite coat.

When it came down to the shoes, Holmes slipped on a pair of tall brown boots that refined her semi-colorful outfit.

Holmes has made her splash within the fashion industry, having starred in campaigns for Ann Taylor. She also was the face of Miu Miu in 2008. Also, she starred in ads for other labels, including J. Crew and Bobbi Brown cosmetics.

Put on a pair of brown boots and add a sleek elevation to your fall outfits.

Flip through the gallery to see Katie Holmes’ best street style from 2004 through 2021.