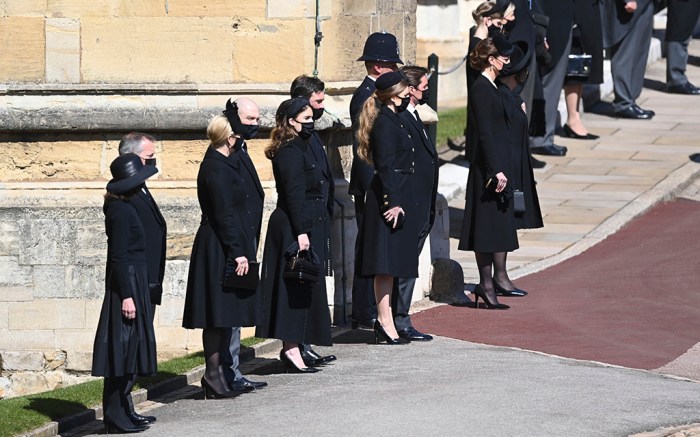 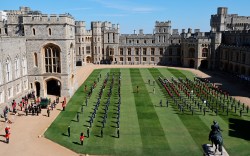 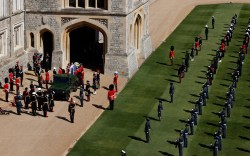 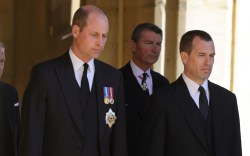 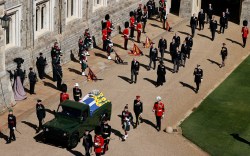 As Queen Elizabeth’s husband of 73 years, Prince Philip was entitled to a state funeral but opted instead for a ceremonial one, which he planned with the sort of military precision befitting of a top-ranking naval officer.

The couple’s grandchildren and their spouses made up a large percentage of the 30 guests who attended the funeral today at St. George’s Chapel at Windsor Castle.

The young royals, including Kate Middleton, Princesses Beatrice and Eugenie and Zara Tindall, all chose similar black ensembles — and all wore black heels, making an elegant statement and sending a message of unity. (All wore black masks to adhere to COVID-19 safety protocols.)

The Duchess of Cambridge matched her Catherine Walker coat dress with black high heels and a clutch — and she finished off the look with a symbolic pearl and diamond choker and pearl earrings borrowed from Queen Elizabeth. The jewels have been worn by three generations of royal women, including Middleton, the Queen herself and the late Princess Diana.

Princess Eugenie — who stepped out publicly for the first time since giving birth to a son named in honor of Prince Philip — wore a black coat dress with heels, a black fascinator and carried a Gabriela Hearst clutch. Her sister, Princess Beatrice, opted for a collared jacket, heels and a hat. Zara Tindall — who recently gave birth to her third child and also named him after her beloved grandfather — arrived in head-to-toe black too.

Pre-COVID-19, there had been plans for a funeral with 800 guests, but the late duke and his team amended those, and downsized the event in line with social distancing measures.

The duke had the forest green Land Rover (which he’d customized himself) carry his coffin to the chapel, picked the readings and the hymns, and planned the military salutes and processions which took place before and after the service.

During the one-hour funeral, which was conducted by Reverend David Comer, Dean of Windsor, and Justin Welby, Archbishop of Canterbury, the duke was remembered for his “unwavering loyalty to the Queen, service to the Nation and Commonwealth, his courage, fortitude and faith.”

The service was filled with traditional Church of England hymns sung by a small choir, as well as musical tributes on bagpipes, bugles and trumpets by members of the armed forces.