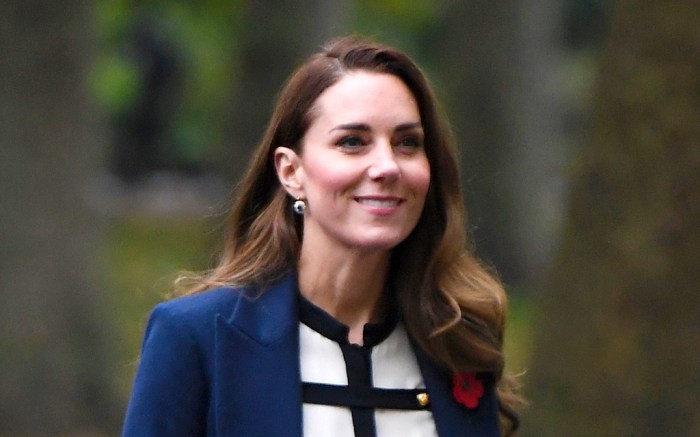 Kate Middleton was in a blue mood at the Imperial War Museum in London on Wednesday.

Once again, the Duchess of Cambridge was an outfit repeater. She donned a previously-worn Alexander McQueen military-style blouse with a navy Catherine Walker coat and slim-fit trousers as she arrived the opening of two new exhibitions: The Second World War Galleries and The Holocaust Galleries.

The 39-year old royal was actually a contributor to the exhibit, too. She took two photographs of Holocaust survivors, Steven Frank and Yvonne Bernstein, and their grandchildren, last year to mark 75 years since the end of the Holocaust, seen in the Generations: Portraits of Holocaust Survivors’s 50 featured images.

Moreover, this specific showcase as a whole features 2,000 photos, books, artworks, letters and personal belongings of some of the 6 million Jewish people murdered by the Nazis. On the other hand, the Second World War Galleries displays over 1,500 collection items from 80 countries during that time period.

In fact, this isn’t the first time that she wore these ladylike heels. Just last week, Middleton wore them to a reception, hosted by the Royal Family, during the COP26 UN Climate Change Conference in Glasgow. The rest of the look included a sharp blue midi dress with pointed shoulders, long sleeves and a cinched waist with two black buttons. Middleton kept her accessories simple, opting for diamond drop earrings, a navy suede clutch and red flower brooch.