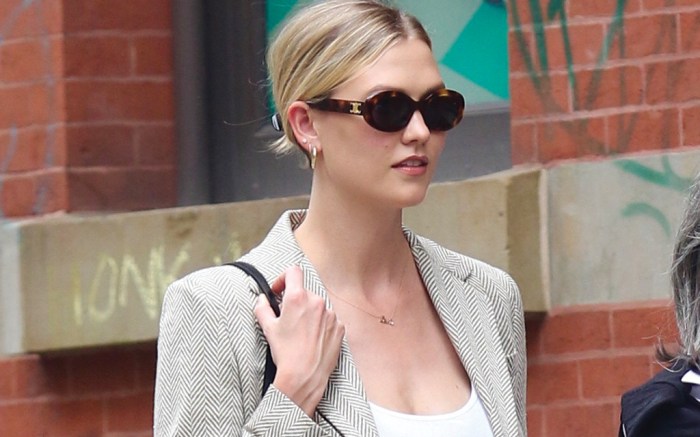 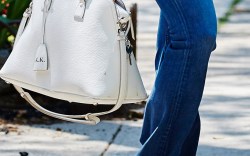 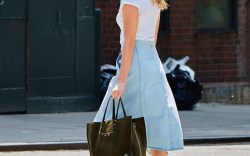 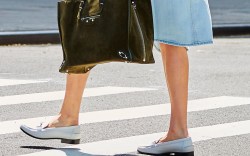 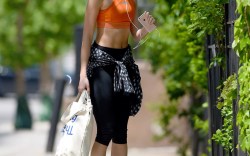 Karlie Kloss is suiting up for summer.

The supermodel went for an afternoon stroll with her son, Levi Joseph (who Kloss welcomed with husband Joshua Kushner last April), and mother-in-law Sheryl Kushner around Soho in New York City yesterday. Her outfit for the family walk was a lesson in summertime chic: a beige herringbone suit layered and white tank top, accessorized with minimal gold jewelry. Kloss also donned a pair of tortoiseshell Celine sunglasses and a black leather Gucci shoulder bag to round out the breezy look.

When it came to footwear, the new mom slipped on a pair of black leather Gucci loafers, featuring the same gold horse bit detail as her handbag. The shoe is a timeless classic, with minimalist details and a slim silhouette. The black leather also makes it especially versatile, with the ability to dress up casual and formal ensembles. You can shop Kloss’ loafers for $830 at Gucci.com.

Suiting has become a must-have among the celebrity set in 2021. Stars like Tracee Ellis Ross, Hailey Bieber, and Bella Hadid have all worn the trend this season in a range of prints and colors, proving its versatility — and there’s sure to be more bold looks arriving this season.

Loafers are a classic way to ground the look, as a staple of menswear-inspired dressing. The shoe has been worn by celebs like Kourtney Kardashian, Olivia Palermo and Kate Mara in recent months, furthering its place in the street style set’s wardrobes. Loafers were a hallmark of style icons like Grace Kelly and Audrey Hepburn, so their inclusion brings an air of sophistication and ’60s sharpness to any look.

Kloss loves a sleek loafer, which she’s worn by brands like The Row, Khaite, and Kurt Geiger. The model’s also particular to Adidas sneakers, having co-designed a collection with the brand that launched last December. For more formal occasions, she’s known to prefer strappy sandals and pointed-toe pumps by Roger Vivier, Giuseppe Zanotti, and Aquazzura.

The former Victoria’s Secret Angel is a longtime member of the fashion community; she’s starred in campaigns for Versace, Dior and Marc Jacobs, among other renowned high-end brands. She’s also a global spokesmodel for Estée Lauder, and has worked as an ambassador for Express, Swarovski, Carolina Herrera Fragrances and more. Outside of fashion, the star is also the founder of Kode With Klossy, a company that empowers girls to learn to code and become tech leaders.

Click through the gallery to find more of Karlie Kloss and Joshua Kushner’s couple style over the years.