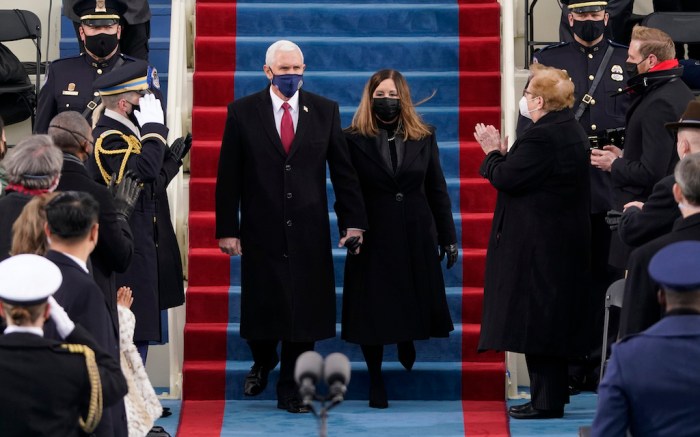 On the heels of Joe Biden’s Inauguration as the 46th President of the United States today, Karen Pence bid her farewell as the soon-to-be-former second lady in her signature attire.

To share the announcement, she wore a cap-sleeved, knee-length dress with a knot-tie waist detail in her go-to navy hue. Pence accessorized the ensemble with a statement gold pendant necklace and polished the look with a pair of matching pumps. Her classic navy footwear choice features a rounded toe and appears to have a smooth leather construction. “Thank you, America! It has been a great honor and privilege to serve as the Second Lady of the United States. Let’s keep in touch at @karen.pence. God Bless the USA! 🇺🇸” she wrote as her caption on Instagram.

Upon her arrival at the ceremony this morning, Pence teamed her outfit with a long black wool coat and coordinating face mask while standing beside her husband and soon-to-be-former Vice President, Mike Pence.

Throughout her term as second lady, Pence wore similarly tailored dresses in her beloved hue teamed with matching heels. In August last year, she wore a variation on this ensemble when visiting Omaha, Neb., and teamed it with a matching blue face mask. When she wasn’t in her favored hue, she tended to opt for neutral hues, classic floral and polka dot prints, or monochromatic outfits in rich warm-toned hues.

At noon ET, Joe Biden will be sworn in officially sworn into office. Later in the evening, a primetime special, titled “Celebrating America,” will spotlight American heroes and is scheduled to take place at 8:30 p.m. ET. The 90-minute program will be hosted by Tom Hanks and will feature speeches from Biden and Harris. Bruce Springsteen, the Foo Fighters, John Legend, Eva Longoria and Kerry Washington will also make appearances.

Click through this gallery to the evolution of Karen Pence’s Second Lady style.