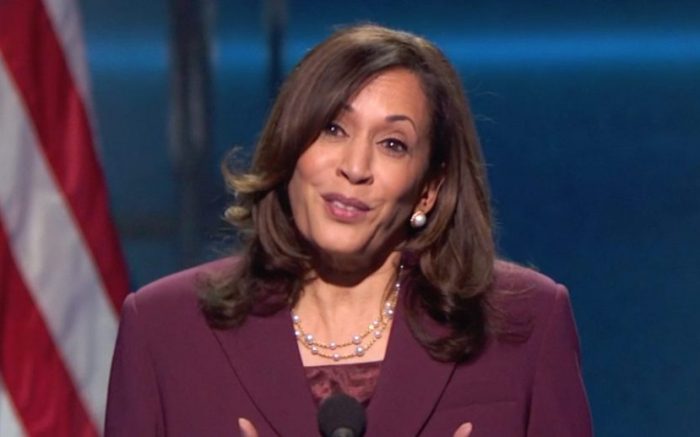 For the publication’s February 2021 print issue, Harris poses in front of a pink and green backdrop — a nod to her sorority Alpha Kappa Alpha Sorority, Inc. — wearing a textured Donald Deal Jacket styled atop a white t-shirt. Harris paired the outerwear piece with black cuffed pants and a layered pearl necklace.

The footwear look proved to be a top choice for Harris after she sported the shoes on a campaign stop in Wisconsin in September and a black leather pair in Florida in October.

For Vogue‘s digital cover, Harris looks regal in a sky blue suit from Michael Kors. The vice president-elect styled the ensemble with a white blouse and a set of blue pearls.

“I always say this: I may be the first to do many things — make sure I’m not the last,” says Vice President-elect @KamalaHarris, “I was thinking of my baby nieces, who will only know one world where a woman is vice president of the United States, a woman of color, a Black woman, a woman with parents who were born outside of the United States,” Vogue captioned a post of the cover, quoting Harris’ interview.

When it comes to her style, Harris often opts for both warm and soft colors like navy, cream, gray, maroon and black. Her go-to accessories include pearls, and when she’s not wearing converse, she can be seen in either black pumps or boots.

In December, Harris made an appearance in Georgia to campaign for now Senator-elect Raphael Warnock and Senator-elect Jon Ossoff, wearing a black turtleneck sweater paired with a checkered blazer and black trousers. As for footwear, Sen. Harris decided to sport sleek square-toe boots that featured a block heel and patent leather uppers.