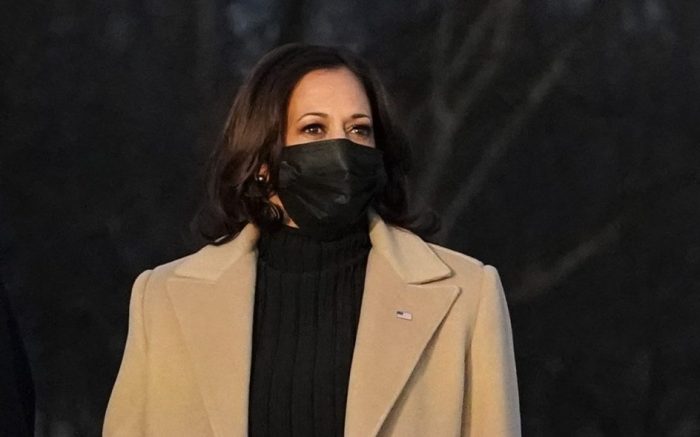 On the eve of the 2021 presidential inauguration, Vice President-elect Kamala Harris attended a COVID-19 memorial, where she used fashion to stand in unity with those affected by the global health crisis.

Standing alongside her husband, Dough Emhoff, and a few feet away from President-elect Joe Biden and his wife, Dr. Jill Biden, Harris wore an all-black ensemble, which included a pair of heeled boots. The boots featured a pointed toe and a slouch construction.

Teamed atop the look, Harris opted for a camel coat adorned with an American flag broach. What makes the outerwear piece significant is that it is from Pyer Moss, a brand founded by Kerby Jean-Raymond — an American-Haitian fashion designer who has made it his mission to provide PPE and relief to small businesses amid the ongoing pandemic.

In March, Jean-Raymond announced on Instagram that he would be converting his New York office into a donation center for N95 masks, gloves and other medical supplies for frontline workers. Additionally, he pledged to donate $50,000 to minority and women-owned businesses that have been particularly hit hard due to the outbreak. “If you cannot make payroll or cannot cover pressing costs to keep your business afloat, please reach out. Let us know what you do and how we can help,” Jean-Raymond wrote on Instagram at the time.

Jean-Raymond’s activism, however, started long before the pandemic. Since Pyer Moss’ debut in 2013, Jean-Raymond has spotlighted and praised diversity and inclusion. He’s paid tribute to the Black Lives Matter movement among others through his shows and clothing and has used his appointment to The Council of Fashion Designers of America to promote more change.

“If I’m [considered a first in my [industry] and I’m not addressing the issues that made it so hard for me to get here in the first place, I’m essentially closing the door behind me,” Jean-Raymond told FN in 2019 when he was named FNAA Person of the Year. “I’m not making it any easier for anyone to come up and and be the next me or bigger than me. Which is my goal: to see a whole generation of artists and designers who speak and look and feel this way come in in droves.”

At the memorial, Harris honored the lives lost to the virus, saying: “Tonight we grieve, and begin healing, together.”

The memorial included an invocation from Cardinal Wilton Gregory and a performance of “Amazing Grace” by a Detroit nurse named Lori Marie Key. Gospel star Yolanda Adams also sang “Hallelujah.” The ceremony was held at the Lincoln Memorial’s reflecting pool, which displayed 400 lights — a tribute to the 400,000 Americans who have died from COVID-19.

Like Harris, Jill echoed sentiments of togetherness with her clothing. At the ceremony, The first-lady-to-be wore an all-purple look, which included a violet coat, shift dress and coordinating gloves from New York-based independent designer Jonathan Cohen. Purple is said to be a symbol of unity as it blends the Republican party’s red with the Democratic blue.