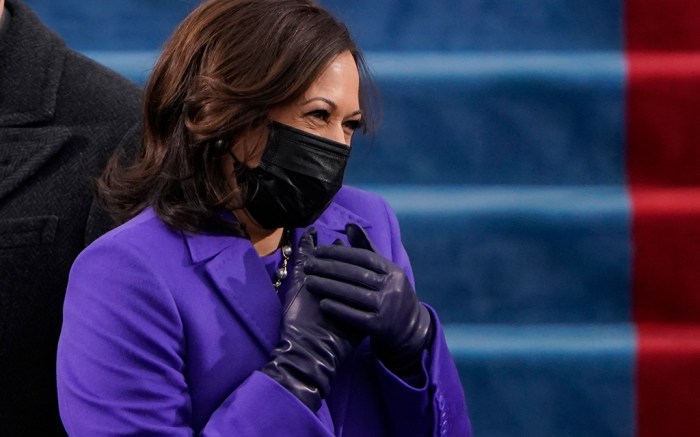 Kamala Harris arrived at the U.S. Capitol on Wednesday in Washington D.C. for the Presidential Inauguration ceremony. She took the oath to become America’s first female vice president. Joe Biden, meanwhile, has become the oldest person ever sworn in as president.

For the momentous moment, Harris made a statement in a purple coat — a color often referred to as a symbol of unity. The VP also chose Black designer Christopher John Rogers for the occasion. He won the 2020 CFDA American Emerging Designer of the Year Award in September.

She completed her look with black patent leather BB pumps from Manolo Blahnik and pearls from Wilfredo Rosado, a Latino jewelry designer based in New York.

Harris continues her dedication to conscious fashion choices as she takes her position in the second-highest office. Last night, she wore a Pyer Moss custom camel coat for a COVID-19 memorial service. Pyer Moss was founded by Kerby Jean-Raymond — an American-Haitian fashion designer who has made it his mission to provide PPE and relief to small businesses amid the ongoing pandemic.

The daughter of Jamaican and Indian immigrants, Harris is the first Black and first South Asian person to serve as vice president. On Wednesday, Harris was sworn in by Justice Sonia Sotomayor, the first woman of color and first Hispanic to sit on the Supreme Court.

Later in the evening, a primetime special, titled “Celebrating America,” will spotlight American heroes and is scheduled to take place at 8:30 p.m. ET. The 90-minute program will be hosted by Tom Hanks and will feature speeches from Biden and Harris. Bruce Springsteen, the Foo Fighters, John Legend, Eva Longoria and Kerry Washington will also make appearances.

To see more moment from Inauguration Day 2021, click through the gallery.