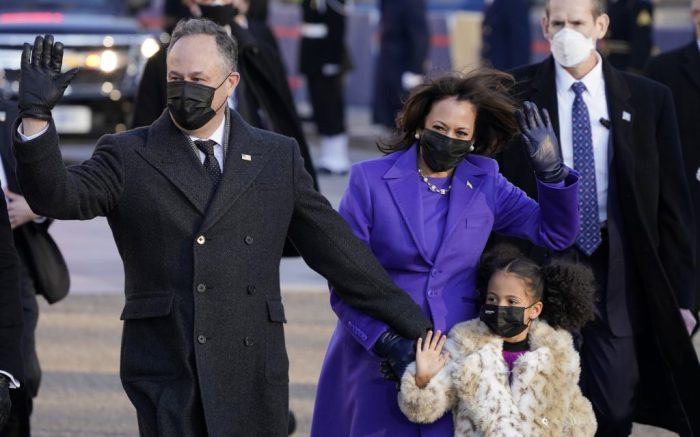 Amid the milestone occasion, Meena Harris — the daughter of vice president’s sister Maya — shared a sweet photo on Instagram and Twitter of her daughters Amara and Leela, wearing matching animal-print fur coats. The cozy outerwear pieces were more than an adorable fashion statement, however. Meena revealed the looks were made “special” to look like a similar coat Kamala once wore as a child.

Alongside the image of her girls, Meena also included a photo of Kamala standing in front of her late mother, sporting a similar fur coat. “Special coats to look just like Auntie’s,” Meena captioned the social media post.

Little Amara and Leela then finalized their inauguration looks in shiny lace-up boots from Dr. Martens. The shoes feature coated leather uppers with a PVC sole. Amara and Leela’s style retails for $60 at Nordstrom.com. The boots are also available in adult sizing at DSW.com for $140. The combat style shoe is a popular look among celebrities, with celebs like: Kourtney Kardashian, Heidi Klum, Jennifer Lopez and more sporting the look in recent months. Dr. Martens are also a must-have brand for stars, including Gigi Hadid and Hailey Baldwin.

This wouldn’t be the first time Meena’s daughters opted for Dr. Martens. Back in November, the little girls celebrated Kamala and Biden’s victory in Wilmington, Del., wearing white leather lace-up boots from the footwear company.

Meena also showcased her style on inauguration day. The lawyer and best-selling author wore a green ruffled dress that featured princess sleeves and a peplum waistline. For footwear, Meena decided on a pair of sparkly knee-high boots from Paris Texas, which retail for $1,820 at ModaOperandi.com.

Biden and Harris’ inauguration made history today for a myriad of reasons. Biden is the oldest person ever sworn in as president while Harris is the first-ever female vice president of the United States. The daughter of Jamaican and Indian immigrants, she is also the first Black person and first person of South Asian descent to serve in the second-highest office. She joins President Joe Biden in leading a country left on the edge of its seat following the second impeachment of current President Donald Trump by the House of Representatives last week.