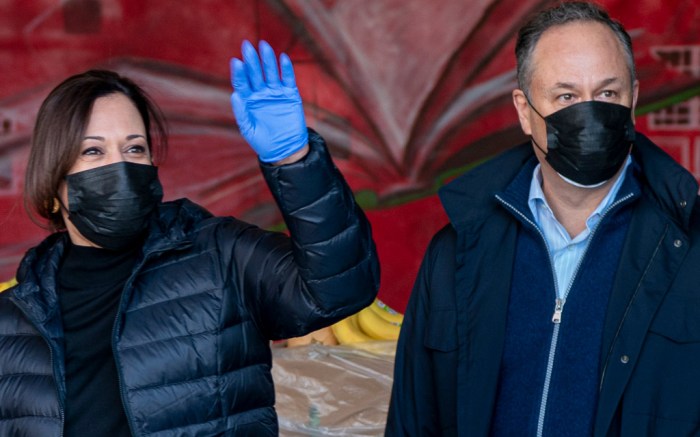 Vice President-elect Kamala Harris and the future second gentleman Doug Emhoff honored the National Day of Service on Monday by volunteering at a local organization in Washington D.C.

The second-couple-to-be spent their day helping to bag food for donation at Martha’s Table, a nonprofit that works to provide the district with access to food, education, health aid and more. For the event, the duo joined Kim Ford, president and CEO of Martha’s Table, as well as a few fellow volunteers to renew their “commitment to serving those in need—and had a little friendly competition going along the way,” as wrote Harris in her caption on Instagram.

To stay warm in the outdoor setting, the former Senator layered a black puffer jacket over a relaxed mock-neck sweater and coordinating skinny jeans. She also doubled up on face masks for added protection.

When it comes to her own personal style, the vice president-elect can be found in a mix of in-style silhouettes including sneakers from one brand in particular: Converse. The brand’s Chuck Taylor All Star silhouette is one of the politician’s most beloved footwear styles. She opts for a low-top version of the classic sneakers in a relaxed black and white colorway. The style is known for its retro look with exposed stitching, textured outsole and contrasting toe cap, all accented with signature All Star logos and patches.

While Sen. Harris’ go-to colorway from the brand may resemble a normal combination, the pair actually switches out the usual canvas uppers with smooth leather fabric, giving it a more glam appeal. The Chuck Taylor All Star Leather retails for $55 at Converse.com.

In less than 24 hours, Kamala Harris will be sworn in as the first-ever female vice president of the United States. The daughter of Jamaican and Indian immigrants, she will also be the first Black and first South Asian person to serve in the second-highest office. The politician recently resigned her Senate seat ahead of her new position. She will join President-elect Joe Biden in leading a country left on the edge of its seat following the second impeachment of current President Donald Trump by the House of Representatives last week.

The inauguration ceremony takes place at 12 p.m. ET tomorrow, Jan. 20, with heightened security measures in place due to the increased threat of armed protests and riots across the country as warned by the FBI. While the proceedings will look different due to health and safety precautions as well, there is still fanfare to be expected. Lady Gaga is set to sing “The Star-Spangled Banner,” appearing alongside the likes of Garth Brooks, Jennifer Lopez, John Legend and more major names slated to perform on Inauguration Day.