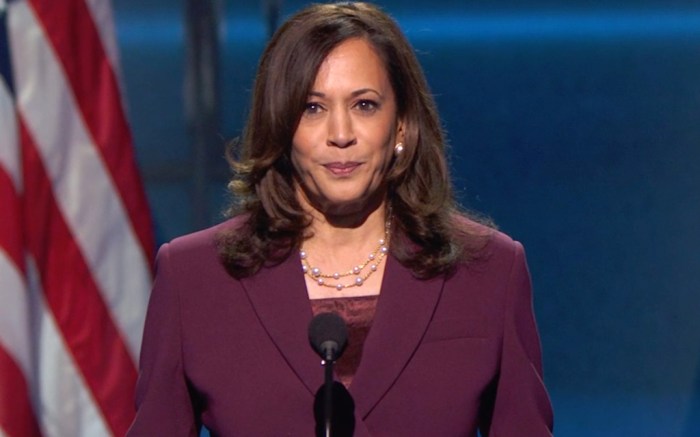 Kamala Harris received an unexpected gift from her niece Meena Harris this afternoon.

As the impeachment trial of Donald Trump continues in the House of Representatives today, the vice president-elect‘s relative took to media-sharing platform TiKTok today to surprise her aunt with a bottle of mouth mints which she jokingly called “impeach mints.” Not expecting the pun, the politician laughed as she sat in a chaise modeling a blush pink tailored suit matched to a dark blouse and socks with a clear message.

Relaxing shoeless inside the home, Sen. Harris kept her feet warm in a pair of blue and white socks that read “The Future Is Female” across the ankle. The tube sock-style silhouette also featured hits of the same teal shade across the reinforced heel and toe. The design comes from Gumball Poodle and retails for just $17 at Amazon.com.

To Buy: Gumball Poodle ‘The Future is Female’ Socks, $17.

The House of Representatives is currently holding impeachment trials for President Donald Trump following the riots that took place at the United States Capitol last Wednesday. The articles of impeachment were introduced by House Democrats under the charge of “incitement of insurrection.” As the House has now officially voted to impeach President Trump as Wednesday afternoon, the decision now moves to the Senate, who must confirm the charges with a two-thirds vote.

The hearings today are part of the second impeachment trials held against President Trump — the first took place from December 2019 to February 2020. The initial case ended in a Senate acquittal of the president on both impeachment articles.