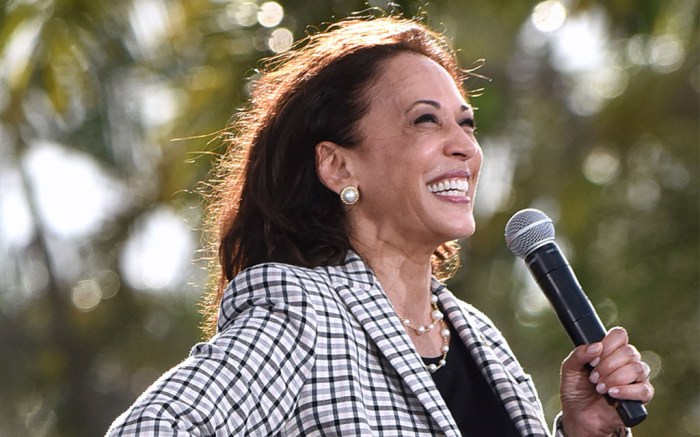 The lawyer, who rose to newfound acclaim for her strong presence on social media throughout her aunt’s campaign, took to TikTok last night to preview her look for tomorrow night’s event. Though the inauguration ball will be held remotely unlike other years, Meena still broke out her best and boldest attire for the occasion as she strutted in a glittering gown on the media sharing platform.

The chocolate brown dress from Nepalese-American designer Prabal Gurung featured a layered bodice with an open-back concept; though the number isn’t currently available, similar designs from the brand retail for around $1,500 at Farfetch.

Pretending to go to the inaugural ball when I’m sitting here pre-recording virtually all by myself. 😥 ( Dress by Prabal Gurung / Boots by Coach )

As for footwear, the best-selling author gave the look a bold twist with a set of thigh-high boots. The Coach design came in an all-black colorway with a form-fitting suede upper and a beadchain trim for a touch of shine. Titled the Wyonna silhouette, the boots are set atop a 3.25-inch stiletto heel as well.

The style retailed originally for $350 but can be found on sale now for $175 at Coach.com.

Meena’s TikTok account made headlines last week, too, when she shared a video of her “auntie” that has now racked up over 16 million views and 3 million likes.

As the impeachment trial of Donald Trump continued in the House of Representatives, the vice president-elect‘s relative surprised her aunt with a bottle of mouth mints which she jokingly called “impeach mints.” Not expecting the pun, the politician laughed as she sat in a chaise modeling a blush pink tailored suit matched to a dark blouse and socks with a clear message.

Relaxing shoeless inside the home, Sen. Harris kept her feet warm in a pair of blue and white socks that read “The Future Is Female” across the ankle. The tube sock-style silhouette also featured hits of the same teal shade across the reinforced heel and toe. The design comes from Gumball Poodle and retails for just $17 at Amazon.com.

While Kamala Harris’ own style earns glowing approval for its chic lineup of tailored pieces and unique flair, Meena Harris’ fashion repertoire is not lacking standout looks, either. From her white three-piece suit and glittering pumps from election day to her denim jumpsuit with floral sneakers promoting local bookstores, the founder of the Phenomenal Woman Action Campaign knows how to style bold attire for any occasion.

Her previous picks support designers from all areas of the industry including a Christopher John Rogers gown, an Argent power suit, a Kynah sari and, of course, a pair of classic Converse sneakers.

Channel the thigh-high boot trend like Meena Harris in these chic styles inspired by her inauguration ball look.