Kacey Musgraves Bares All in Cowboy Boots for ‘SNL’ Performance 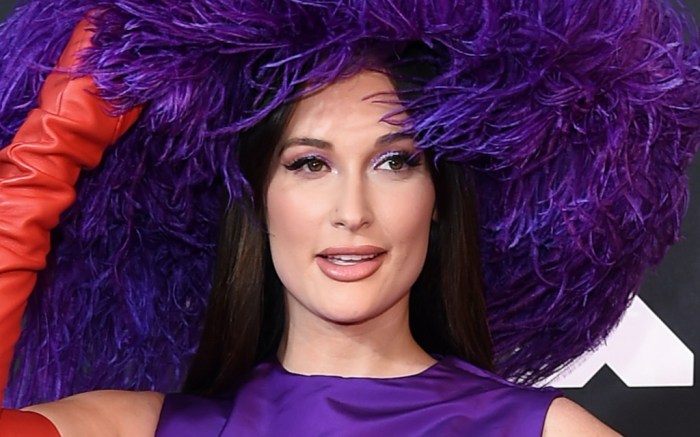 Kacey Musgraves bared all for her performance on “Saturday Night Live” this weekend — quite literally.

The Grammy Award-winning musician took the stage to perform her new song, “Justified,” from her just-released album “Star-Crossed.” During this set, Musgraves only wore a pair of leather cowboy boots. The calf-high style featured pointed toes and rounded uppers, as well as intricate stitching on their sides. You can watch her full performance, below:

However, Musgraves had additional outfit changes during the episode, hosted by actor Owen Wilson. The “Rainbow” singer wore a brown leather corset top with matching trousers and a gold pendant necklace for commercials promoting her performance. She also donned a cropped brown flannel shirt and blue jeans for her second musical performance of “Camera Roll” later in the episode—though opted to go barefoot.

Cowboy boots have slowly been trending this year, due to a rise in vintage styles that were popularized during the Y2K era. Musgraves has been wearing the style for years, due to her country music roots. In recent months, a range of other celebrities have been inspired by the Wild West and worn cowboy boots, including Kendall Jenner, Lil Nas X and Sophie Turner.

When it comes to shoes, boots are one of Musgraves‘ go-to styles; knee-high silhouettes are a favorite, like the custom brown Ralph Lauren pair she wore to the 2021 Met Gala. However, her repertoire often includes other styles, like Schutz mules and Gucci loafers. When off-duty, Musgraves prioritizes comfort, regularly wearing Freedom Moses sandals, Adidas slides and Nike sneakers.

Bring cowboy flair to your wardrobe in Western boots, inspired by Kacey Musgraves.

Click through the gallery to discover Kacey Musgraves’ style evolution over the years.