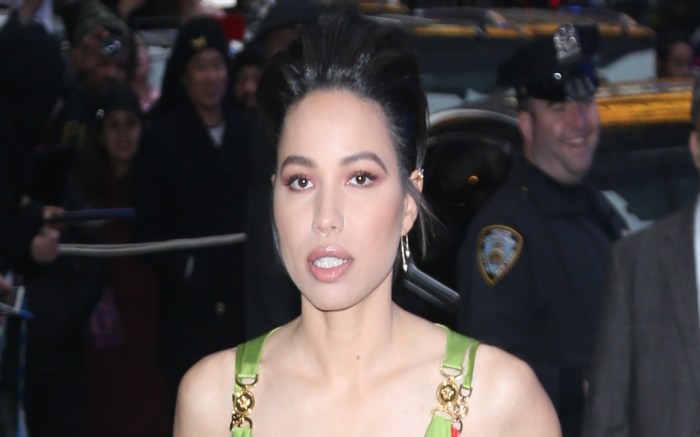 Jurnee Smollett provided a lesson on color blocking at the 2021 NAACP Image Awards.

For Saturday’s ceremony, Smollett showcased a modern yet glamorous look, wearing a black and green dress from Alexandre Vauthier. The top of the dress featured a black velvet bandeau teamed with an emerald satin skirt that featured a thigh-high slit.

Smollett accessorized with green dangling earrings and styled her hair in a blunt bob. As for footwear, Smollett continued the color blocking theme with a vibrant pair of heels also from the label.

The shoes featured pink straps around the ankle and toe and were adorned with an orange rose. The use of three different colors created a fun and springy look that was perfect for the red carpet.

Last night, Smollett was up for Outstanding Actress in a Drama Series for her role in HBO’s “Lovecraft Country.” Viola Davis took home the award for “How to Get Away With Murder.”

Of the awards show, Smollett said on Instagram: “Got dressed up to attend the @NAACPImageAwards from my living room and I lost to my Queen @ViolaDavis!!! Yay!!! Legendary moment!! I’m celebrating. But for real — there’s no such thing as a loss when you’re able to stand alongside such legends and queens as: @im.angelabassett @violadavis @therealbrandee @simonemissick… such an honor @naacpimage awards.

Smollett starred as Letitia “Leti” Lewis in “Lovecraft Country.” The series followed Leti and Atticus Freeman (Jonathan Majors) as they travel across the U.S. in the 1950s in search of his missing father.