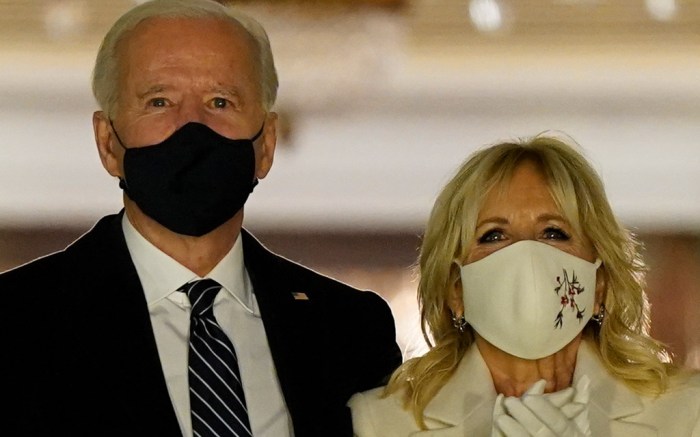 The former educator stood alongside her husband at both the Lincon Memorial and on the balcony of the White House yesterday during the “Celebrating America” inauguration special. For the event, Jill opted for a unique cashmere coat, silk wool dress and matching face mask from one of her go-to designers, Gabriela Hearst.

The custom-made pieces featured floral adornments that held great meaning, embroidered with the federal flower for every state and territory in the country. The design is said to represent unity and emphasizes the importance of all citizens coming together as one during these trying times.

As for footwear, the new first lady slipped on a set of satin blush heels to accent her personalized ensemble; the classic pointed-toe pumps came set atop a steep stiletto heel with a foot-flattering rounded vamp to finish.

In addition to her custom Gabriela Hearst gloves, the final accessory for Jill’s ensemble was the corsage on her wrist. The piece garnered public support for its historical hommage — reportedly both Mamie Eisenhower and Betty Ford wore corsages on their husbands’ inauguration nights — as well as its sweet touch as a gift from the president to his wife.

Biden and Harris’ inauguration made history yesterday for a myriad of reasons. Biden is the oldest person ever sworn in as president while Harris is the first-ever female vice president of the United States. The daughter of Jamaican and Indian immigrants, she is also the first Black person and the first person of South Asian descent to serve in the second-highest office. She joins President Joe Biden in leading a country left on the edge of its seat following the second impeachment of current President Donald Trump by the House of Representatives last week.

Click through the gallery to discover more major moments from the 2021 Inauguration Day celebrations.