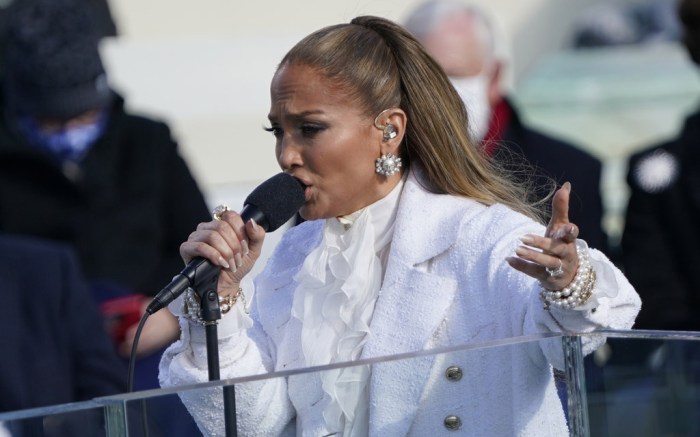 Jennifer Lopez took the podium at the inauguration of now Vice President Kamala Harris and President Joe Biden today in a bold look.

Performing “This Land Is Your Land” and “God Bless America” following Harris’ swearing-in, Lopez grabbed the microphone to honor the momentous occasion with song. For the inauguration, J-Lo modeled a shimmering monochromatic ensemble that teamed a ruffled blouse with wide-legged sequin trousers and a coordinating Chanel coat.

For footwear, Lopez tapped Jimmy Choo’s Max platform sandals to balance the elongated hem of her pants; the towering sandals measure 6 inches in height and retail for $950 at Fafetch.com.

Jennifer Lopez belts out her version of "This Land Is Your Land" during the inauguration ceremony for President Joe Biden and Vice President Kamala Harris. pic.twitter.com/WbnqeI3kRl

WATCH: Jennifer Lopez performs "This Land is Your Land" and "America the Beautiful," at the inauguration.https://t.co/WegAJRvMdn pic.twitter.com/GACVPK4t94

While the proceedings will look different due to health and safety precautions as well, there was still fanfare to be expected. Lady Gaga sang “The Star-Spangled Banner,” appearing alongside the likes of Garth Brooks and who also performed during the inauguration ceremony along with Lopez.

It was just last year when the Grammy-nominated singer herself dipped her own toes into the footwear industry. Though she had previously worked with a mix of brands on collaborations and campaigns, the JLo Jennifer Lopez collection at DSW is the musician’s first solo line; the label includes a variety of stylish footwear ranging from sky-high platforms and glittering pumps to strappy sandals, all retailing from $59 to $189.

As if all of her titles were not enough, the past few seasons alone, the “Maid in Manhattan” actress also has been featured in three major spring ’20 campaigns as well as a few top names for fall ’20, too. She modeled for Versace, stars in ads for Guess and Coach on top of serving as a judge and executive producer for “World of Dance.” She also teased a new J-Lo Beauty line earlier this season as well.