J-Lo Jets Off to D.C. For the Inauguration in Bold Pants That Camouflage Right Into Her Boots 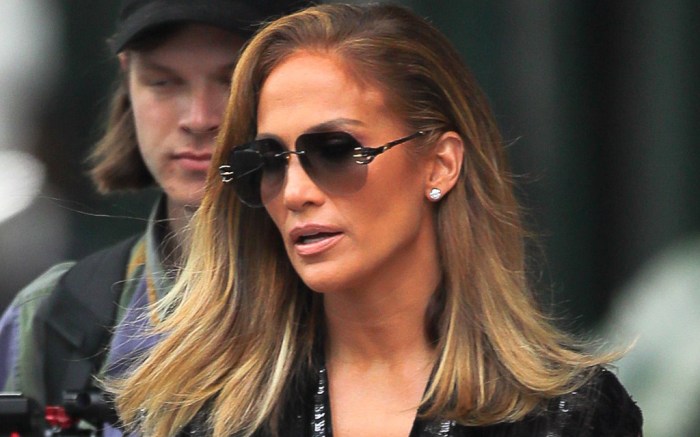 President-elect Joe Biden and Vice President-elect Kamala Harris’ inauguration is less than 24 hours away and Jennifer Lopez is making her way to Washington D.C. for the momentous occasion.

The “On the Floor” singer posted a photo before on the jetway she headed to the nation’s capital ahead of tomorrow’s event at which she will be performing. Staying stylish as always, Lopez opted for a twist on the monochrome trend courtesy of Alberta Ferretti.

Monochrome styling has become one of this season’s biggest trends, favorited by the likes of Kourtney Kardashian, Emma Roberts, Rihanna and more for its streamlined appeal. Lopez herself has been a longtime fan of the outfit combination, wearing everything from coordinating blouses and trousers to matching sweatsuits and sneakers.

Lopez’s “DC Bound” take on the trend included a soft sweater teamed with a chevron trench coat and wide-leg pants that camouflaged right into her slouchy gray boots. The textured boots featured a chic square-toe finish and a heeled lift, with all apparel and accessories coming from Alberta Ferretti’s fall ’20 collection.

The inauguration ceremony takes place at noon ET tomorrow, Jan. 20, with heightened security measures in place due to the increased threat of armed protests and riots across the country. While the proceedings will look different due to health and safety precautions as well, there is still fanfare to be expected. Lady Gaga is set to sing “The Star-Spangled Banner,” appearing alongside the likes of Garth Brooks, Bon Jovi John Legend and more major names slated to perform in addition to Jennifer Lopez on Inauguration Day.

“Celebrating America” will broadcast live on ABC, CBS, CNN, NBC and MSNBC. It will also be streamed live on YouTube, Facebook, Twitter and Twitch. Coverage of the inauguration will begin at 9 a.m. ET and will be broadcast on every major network, including ABC, NBC, CBS, Fox, CNN, PBS, Telemundo, Univision and MSNBC. Viewers can also catch the ceremony via the official White House Website, the Biden Inaugural Committee’s YouTube livestream and on Facebook, Twitter as well as Amazon Prime Video.

Click through the gallery to discover more of Jennifer Lopez’s most memorable looks over the years.