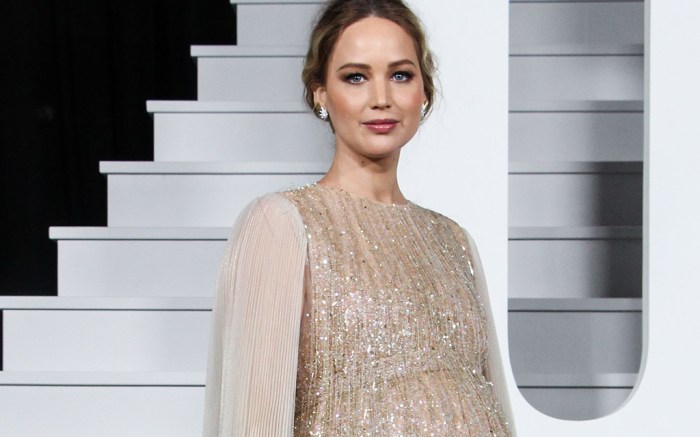 Jennifer Lawrence has returned to the red carpet. For the premiere of Netflix’s “Don’t Look Up” on Sunday night in New York, the pregnant star arrived in a dazzling gold gown.

Wearing Dior, Lawrence’s dress featuring shimmering fringe with a sheer cape that covered her arms. She paired the gown with platform sandals and Tiffany & Co. jewels.

Lawrence was also spotted at the premiere with co-star Leonardo DiCaprio. For his look, the movie star wore a navy suit by Alexander McQueen.

In the film, both Lawrence and DiCaprio play astronomers who go on a giant media tour to warn mankind of an approaching comet that will destroy planet Earth.

Fittingly, DiCaprio’s red carpet outfit was made from sustainable regenerative wool while is white shirt came from organic cotton. The actor has been an outspoken advocate for environmental issues — most notably climate change — throughout the years.

Other stars in the film include Jonah Hill, Meryl Streep, Timothée Chalamet, Ariana Grande, Kid Cudi, Ron Perlman, among others.

To see Jennifer Lawrence’s red carpet looks through the years, click through the gallery.