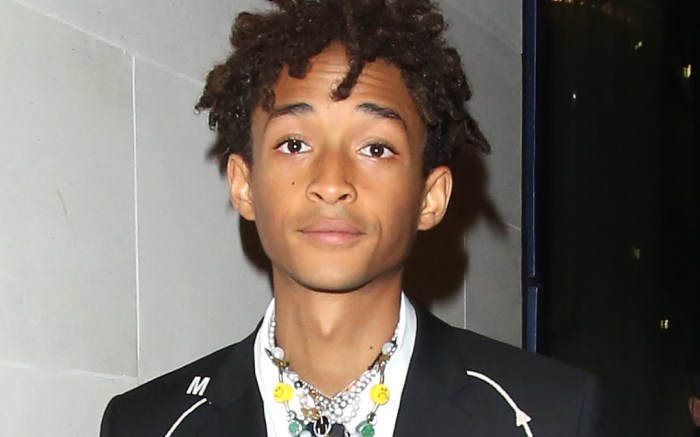 The “Karate Kid” actor was spotted leaving the British Vogue Fashion Party at the Londoner Hotel in Leicester Square, London. To address the ensemble, Smith donned a black suit, which incorporated a graphic design in an almost sketched white ink; the set in fact comes from his own clothing line MSFTSrep, as branded on the arm and across the suit. He accessorized it with a statement-making beaded necklace and coordinating bag.

For the shoes, Smith wore a pair of black Chelsea boots that had a slight metallic tip on the front of the shoes. The patent leather pair also featured exposed stitching and a lifted block heel.

Most have come to know Smith for his statement style, which lives on the crux of being trendy and daring. Smith typically wears garments like sleek denim wear, intricate leathers, sharp suiting, dashing outerwear, colorful-printed separates and comfy hoodies. Smith’s personal shoe aesthetic consists of trendy silhouettes like sneakers and boots different brands in a vast variety of designs.

Jaden is no stranger to the fashion industry, having starred in campaigns for fashion brands like Louis Vuitton and New Balance — with whom he also released his own sneaker collab, too. In 2016, Smith shocked the world by donning a skirt in a Louis Vuitton ad campaign. He also launched his own clothing line, MSFTSrep, which includes a variety of trendy clothing that has a streetwear vibe. The “Icon” singer also collaborated with the sock brand Stance for his “Trippy Summer” pop-up shop in 2019.

Put on a pair of black Chelsea boots and add a bit of refined sophistication to your outfits, inspired by Jaden Smith.

Click through the gallery to see Jaden Smith’s craziest accessories.