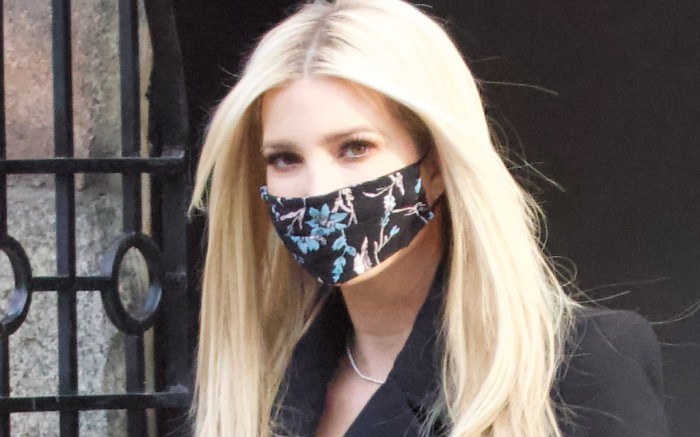 Ivanka Trump left her home in Washington, D.C., today. Tomorrow marks the last day of President Donald Trump’s term in office as President-elect Joe Biden will be inaugurated as his successor.

The first daughter stepped into a Secret Service vehicle this morning as she headed to work in all-black attire. The outfit layered a double-breasted trench coat with an asymmetrical hem over a coordinating shift dress with a printed face mask for a touch of texture.

As for footwear, the monochromatic appeal of her ensemble continued with a set of classic pumps. The pointed-toe design featured a rounded vamp atop a steep stiletto heel, all coated in a smooth suede finish. The former footwear head herself has previously worn similar designs courtesy of Gianvito Rossi and Jimmy Choo.

As President Donald Trump’s term comes to a close, the nation is still fumbling with the controversies that overtook the news cycle surrounding his office thus far in 2021. Last week, the House of Representatives started its impeachment trials for President Trump following the violent riots led by his supporters that took place at the United States Capitol on Jan. 6. The articles of impeachment were introduced by House Democrats under the charge of “incitement of insurrection.” As the House officially voted to impeach President Trump last Wednesday, the decision now moves to the Senate, who must confirm the charges with a two-thirds vote.

The hearings last week are part of the second impeachment trials held against President Trump — the first took place from December 2019 to February 2020. The initial case ended in a Senate acquittal of the president on both impeachment articles.

In addition, President Trump also announced that he and Melania will not be in attendance at tomorrow’s inauguration ceremony of Joe Biden, making him the first president in modern times to skip his successor’s swearing-in. The president instead, according to a report from NPR, plans to hold his own departure ceremony at Joint Base Andrews before jetting off to his Mar-a-Lago estate in Florida, where he will reside for the time being.