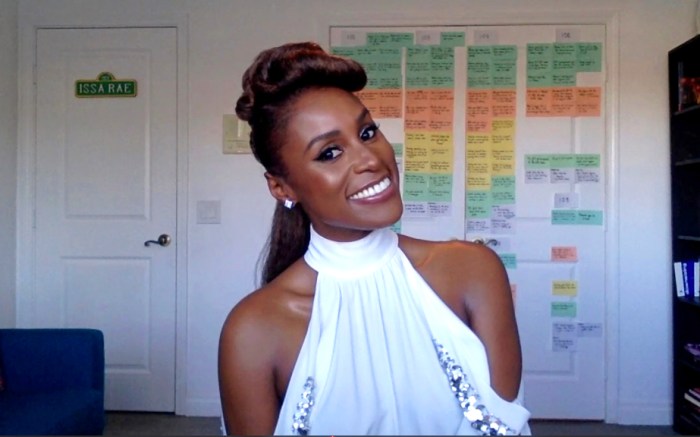 For the ceremony, which took place on Saturday, Rae shared a slideshow of photos of her look on Instagram. The actress opted for an angelic ensemble, wearing a whimsical white gown from Prada.

Dress featured a turtleneck, cutout sleeves and sparkly embellished details at the leg and arm. The frock also cascaded down behind her, creating a goddess-like effect.

As for footwear, Rae opted to compliment the jeweled details on the dress by wearing metallic heels from Stuart Weitzman. Called the Nudist Disco Sandals, the shoes feature a silver strap across the ankle and toe and sit atop a stiletto heel.

Last night, Rae took home Outstanding Actress in a Comedy Series for her role as Issa on “Insecure.” Of the honor, Rae said in her acceptance speech: “It means the world to me. It’s the only validation that matters — Black people’s validation — so I really appreciate the NAACP for honoring us. It means so much.”

Rae wasn’t the only celeb to wow in Stuart Weitzman. Regina King teamed her custom rust taffeta gown from Oscar de la Renta with shiny gold heels from the footwear label. The shoes were bronze in hue and featured a strap across the toe and ankle. The footwear was finalized with a sleek stiletto heel. King was nominated in two categories: Entertainer of the Year and Outstanding Directing in a Motion Picture for “One Night in Miami.”

The 2021 NAACP Image Awards aired on March 27 on BET and were hosted by Anthony Anderson.

Click through the gallery to see more moments from the 2021 NAACP Image Awards.