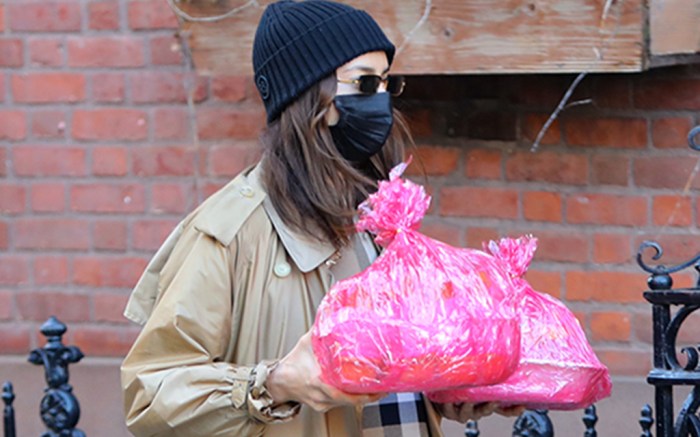 Irina Shayk celebrated the end of the week in style.

The model was spotted out on Friday in New York City with Bradley Cooper and their 3-year-old daughter, Lea De Seine. For the occasion, Shayk slipped on a trench coat over a Burberry sweater and cuffed jeans. She appeared to be wearing one of her favorite pairs of chunky boots from Polish designer, Magda Butrym, as well as a black beanie, sunglasses and a matching face mask.

The mom-on-the-go continues to tap the chunky boot as her shoe style of choice for winter. Shayk’s go-to shoe can wade through puddles and snow without compromising her style.

The model tends to pick black leather boots with a chunky lug sole to style with her usual trench coat and jeans combo; previously Shayk has tapped top brands for footwear including Dr. Martens, Both and Bottega Veneta.

For her look this morning outing, Shayk’s footwear of choice appears to come courtesy of Magda Butrym in a silhouette that the model and actress has been spotted out in a few times before.

The designer carries both a knee-high version of the boot as well as a shorter, calf-length option. The two styles are available to shop at Net-a-porter.com starting at $1,160.

It’s unclear whether Shayk owns both pairs, but needless to say, the chunky black boot is a closet staple for the star. The model loves a good tall boot, which can instantly elevate a casual look. Shayk loves to pair her tall boots with a pair of leggings. The sleek shoe transforms her casual wear and allows her to appear as the street style star she is while being comfortable.

Throughout her career, the Russian model has served as the face of campaigns and runways for major fashion powerhouses like Burberry, Moschino, Versace and more. When she isn’t working, her go-to footwear brands include everything from Nike to Amina Muaddi and Stuart Weitzman.