H.E.R. Is Spring Ready in a Floral Jewel-Encrusted Suit & Metallic Heels at the Critics’ Choice Awards 2021 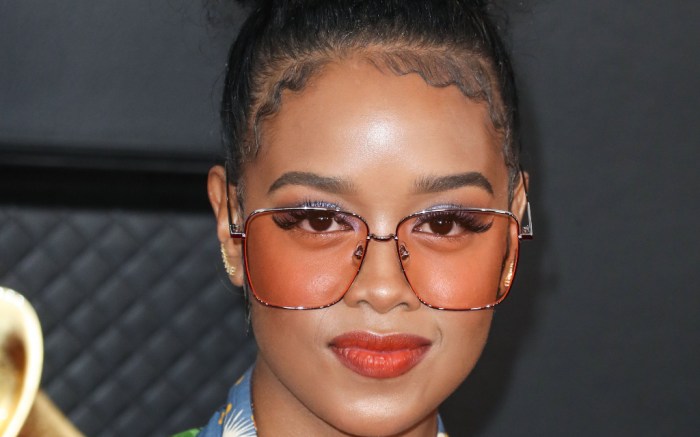 For the ceremony, the “Slide” singer looked whimsical in a floral, jewel-encrusted suit from Miu Miu. The ensemble featured a cinched blazer and tailored trousers.

H.E.R. teamed the dainty look with jewels from Chopard and of course her signature sunglasses. The star also styled her hair in a loose, curly updo. As for footwear, H.E.R. added a pop with metallic strappy heels that were adorned with stones. The sleek shoes were positioned atop a stiletto heel.

The singer’s award show moment comes after she sang “America the Beautiful” at the Super Bowl last month. For the occasion, H.E.R. wore a graffiti-clad biker jacket teamed with two-toned flare jeans. The jeans featured jewels at the top and a hand-painting of a starry background at the bottom. On her feet, H.E.R. opted for red platform shoes. The glossy footwear featured a thick block heel and a rounded toe.

Tonight, the Critics’ Choice Awards are airing live at 7 p.m. ET on the CW. The show can also be streamed live on Hulu, fuboTV and Sling TV. Taye Diggs is hosting this year’s ceremony, making it his third time in a row. The actor will be emceeing live from the stage of Barker Hangar in Santa Monica.

Click through the gallery to see more looks from the Critics’ Choice Awards 2021.