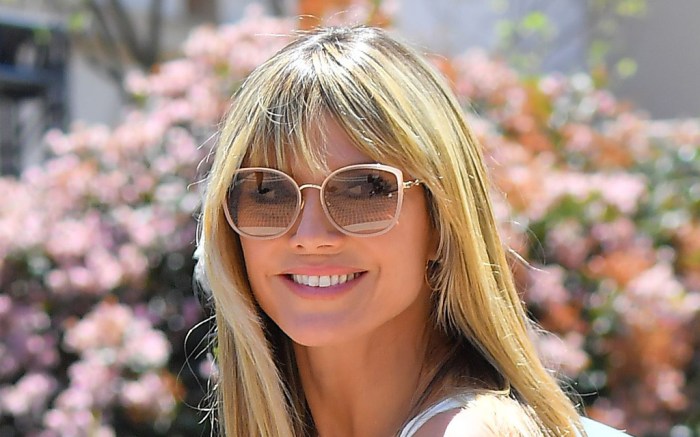 Heidi Klum shopped her closet for an Independence Day look this weekend, proving that beloved pieces can stand the test of time.

The “Making the Cut” host donned a vintage white Valentino dress for the occasion. The flowing dress featured a halter neck and high slit, as well as an abstract pink and black print on the neckline and hem. Klum kept her accessories punchy and minimal, adding an angular pair of sunglasses and a magenta Saint Laurent clutch to the ensemble. Her manicure and pedicure, done in sharp white polish, perfectly matched her outfit as well.

For footwear, Klum slid on a pair of tan leather T-bar sandals. The style is a chic version of the thong sandal trend, which has grown in popularity this summer. Klum’s pair featured minimalist slide straps with an elongated toe thong, ideal for hotter temperatures and easy wear. The pair can also be worn with a range of summer outfits, from a breezy dress like Klum’s to a more casual T-shirt and jeans.

Klum’s summer sandal wardrobe has been similarly chic and bohemian, with added flair through textures and prints. The model previously wore a pair of ankle-wrap sandals adorned with puka shells last week while shopping with her family. Throughout the season, she’s also been spotted in a range of slides and heeled sandals featuring details like padded leather and strawberry prints. Klum’s also no stranger to a T-bar thong sandal; she wore a similar brown leather pair with a silky suit while on set for “America’s Got Talent” this spring.

Klum has had a busy year so far, recently returning as a judge for the latest series of NBC talent show “America’s Got Talent.” The model also announced the renewal of Amazon Prime’s series “Making the Cut,” which she co-hosts alongside her former “Project Runway” co-star Tim Gunn. The competition series profiles rising designers and adds their winning designs to shop live every week on Amazon. Additionally, she’s served as the host and executive producer of “Germany’s Next Top Model” since 2006, and just wrapped the show’s 16th season.

Prior to her TV stardom, Klum began her career modeling for Victoria’s Secret, Sports Illustrated and Givenchy. She was notably the first German model to become a Victoria’s Secret Angel in 1999. The model has also founded her own lines of intimates, swimwear and perfumes, and even designed a fashion line for German grocery store Lidl. In her shoe rotation, Klum prefers variety, having been seen in styles from Birkenstock sandals to Christian Louboutin stilettos.

Add some breezy vibes to your summer outfits with T-bar sandals, inspired by Heidi Klum.

Click through the gallery for more of Heidi Klum’s best style moments over the years.