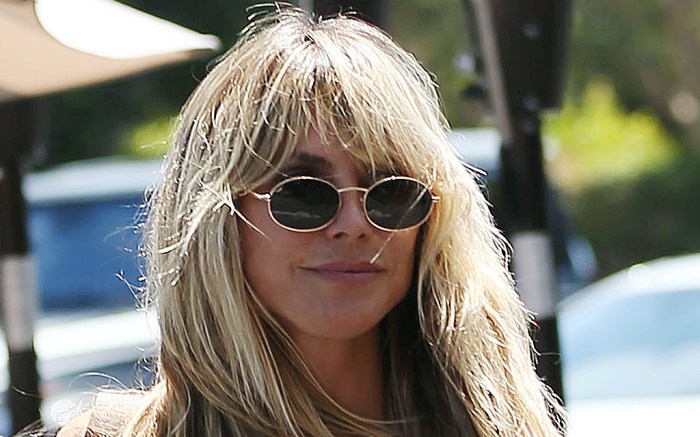 Heidi Klum was ready to take on the jungle in her latest look.

While filming the second season of “Making the Cut,” the media personality took a walk on the wild side in mixed animal prints, styled by Rob Zangardi and Mariel Haenn. Klum donned a paneled silk dress by Burberry covered in gold leopard and beige snake prints.

The garment included an array of details, including a coordinating tie belt and bodice pockets, paired with matching snake-print pants. At one point, Klum layered her look with Norma Kamali’s iconic Sleeping Bag coat in a punchy leopard print. Together, the patterns created a monochrome effect that made the ensemble streamlined and chic.

Aside from two silver rings and beaded bracelets, Klum’s look was completed with Femme LA’s patent Gianni python-print mules. Her pair was an edgy take on the sandal with pointed-toe soles and 4.5-inch heels. The shoes’ reptilian print created a longer silhouette while coordinating smoothly with Klum’s outfit. Similar styles have been trending this summer, due to their ’90s roots and ease to slip on and off; Femme has led the charge, with its shoes worn by stars like Ciara, Hailey Baldwin and Emily Ratajkowski. Klum’s mules retail for $189 on Femme.La.

The “America’s Got Talent” judge‘s summer shoe rotation often features chic, comfortable, and utterly bohemian sandals. Klum has been spotted in styles that include thong straps, shells, and even strawberry prints from brands like Gucci and Birkenstock. However, Klum’s fashion background extends far beyond wearing stylish shoes; the star began her career modeling for Victoria’s Secret, Sports Illustrated and Givenchy, and has even founded her own lines of intimates, swimwear, perfumes, and clothing with German grocery store Lidl.

Add a sleek edge to your summer looks with snake-print sandals, inspired by Heidi Klum.