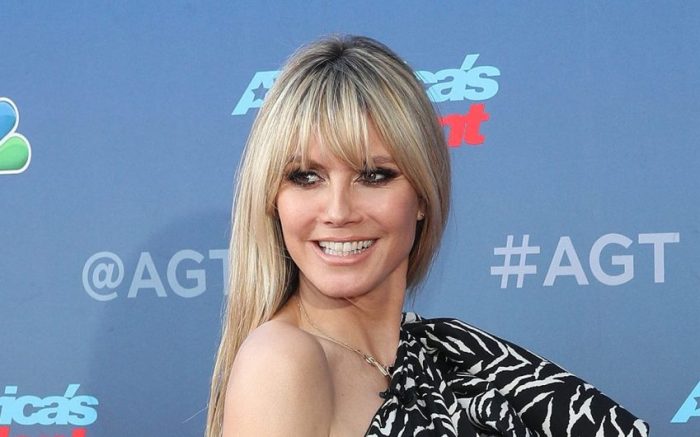 On Saturday, Klum shared a video of herself enjoying a stroll, wearing a black sweatshirt and black joggers. The model kept warm in the elements with the coziest white puffer coat from Moncler. The outwear piece was equipped with ultra padded, igloo-like sleeves and a cozy hood that featured a zip-up closure. A similar style from the brand is available for $1,770 at Farfetch.com.

Klum finalized the ensemble with a pair of chunky combat boots. The shoes appear to feature a lace-up closure and a thick rubber heel. Klum’s footwear choice, which trended big among celebrities, including Kourtney Kardashian, Lizzo and Jennifer Lopez last year, is an ideal winter shoe as it pairs well with loungewear, denim and dresses. Klum’s shoe is also good for daily wear due to the thick sole.

Her off-duty style moment comes after she debuted new promotion for the upcoming season of “Germany’s Next Topmodel” in a bold red look.

Posing alongside the show’s contestants, Klum wore a red red embellished floor-length gown that featured cutouts and a high slit. Klum teamed the sparkly frock with a pair of red strappy sandals.

When it comes to her wardrobe for “Germany’s Next Topmodel,” Klum doesn’t shy away from bold patterns and textures. One of her most standout on-set outfits came on Dec. 4 when Klum shared a photo of herself wearing a head-to-toe MSGM. The model opted for the brand’s Swirly Heart Intarsia Sweater, which is on sale for $291 at Farfetch.com and MSGM’s Venus Flytrap Midi Skirt that comes with a $203 price tag at Neimanmarcus.com. On her feet, Klum sported the label’s knee-length pointed-toe boots. The boots, which are leather in construction and feature a buckle detail at the foot, are available for $567 at Farfetch.com.

Shop similar boots as Heidi Klum with these picks below.

Click through the gallery to see more style moments from Heidi Klum.