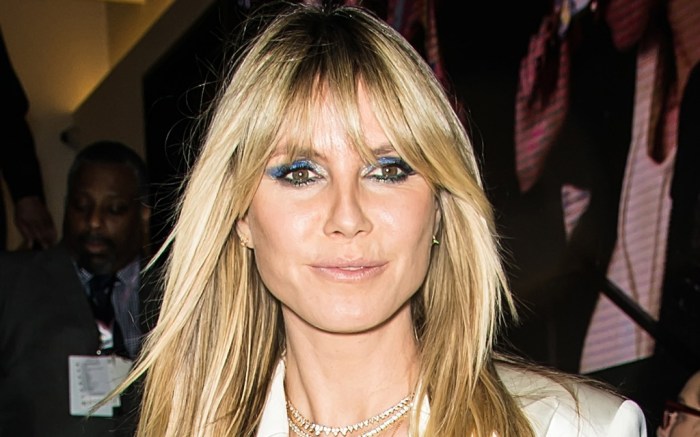 The former model herself previewed a photoshoot today for About You during Mercedes-Benz Fashion Week Berlin as she strutted in a glowing white jumpsuit; the bright one-piece look came adorned with a glittering bodice as well as a tailored blazer. The real kicker of the moment wasn’t just Klum’s outfit for the shoot but her set — instead of a normal catwalk, the German native showed off her skill on a treadmill.

She walked with power and poise, lifted from the track up thanks to her pointed-toe white pumps that peeped out from under the long hem of her pants.

In another bold photoshoot last week, Klum returned as the host of “Germany’s Next Topmodel,” proving this season is about to be bigger and bolder than ever.

The television personality herself took to Instagram to debut new promotions for the upcoming series, posing in front of a few of the competitors in the newest season. Klum herself popped against the model’s white dresses as she opted for a glittering red design that was hard to miss; the one-shouldered number included a high-leg slit along with peek-a-boo cutouts across the back, torso and sides.

The hem exposed a matching pair of cherry red sandals as well, set atop a steep stiletto heel and secured by a series of thin leather straps.

2020 was a major year for the model; Klum also completed her bout serving as a judge on her NBC talent series as well as the co-host of Amazon Prime’s series “Making the Cut” this year alongside her former “Project Runway” co-star Tim Gunn; the competition series profiled up and coming designers with winning styles added to shop live every week to Amazon. She also has served as the host and executive producer of the aforementioned “Germany’s Next Topmodel” since 2006.

Make your outfit glow like Heidi Klum’s in these bright white heels.

Click through the gallery to find more of Heidi Klum’s boldest style moments over the years.