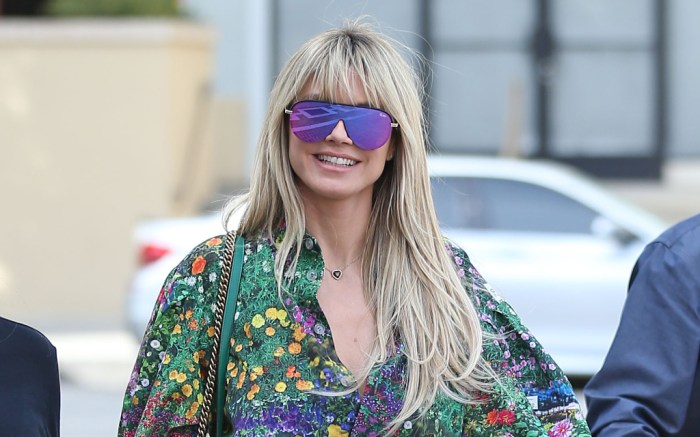 On Wednesday, Klum shared a promotional clip for “Germany’s Next Topmodel,” which shows her popping a lavish balloon display. For the occasion, Klum — who hosts the competition series — provided major spring inspo in a flowy mint green dress. The satin frock featured a wrap construction and flowed down to her feet.

To complete the look, Klum opted for shiny patent leather boots in a chocolate hue. The sleek over-the-knee footwear featured a pointed toe and sat atop a stiletto heel. Flowy dresses and boots are the easiest outfit formula for achieving a boho look. Klum’s outfit, however, gave the easy-going aesthetic and twist due to her choice of footwear and the elegance of the dress.

Additionally, Klum’s ensemble gives a lesson on pairing colors. While green and brown may seem like an unconventional combo, the colors create a vibrant, yet warm and earthy aurora.

Klum is definitely a pro when it comes to making bold looks work. She often plays around with textures, she mixes patterns and prints and doesn’t shy away from cut outs. When it comes to brands a few of her staples include: Christian Louboutin, Moschino, MSGM, Crocs and Birkenstocks.

In January, demonstrated how to double up on animal prints when she shared a video of herself and her husband kissing while on a walk with their dogs. For the romantic outing, Klum stayed warm in a cozy brown teddy coat.

Klum enhanced the outerwear piece with a pair of leopard print pants. The model then completed the look with matching platform boots. The lace-up shoes feature black paneling at the top and a thick black outsole. Klum’s double animal print moment works due to the pants and shoes being of a similar hue. The patterns are also balanced out by the brown coat, making the look appear to be more of a neutral ensemble.

Add sleek chocolate boots to your wardrobe with these picks below.

To Buy: Steve Madden Viktory Over the Knee Boot, $100