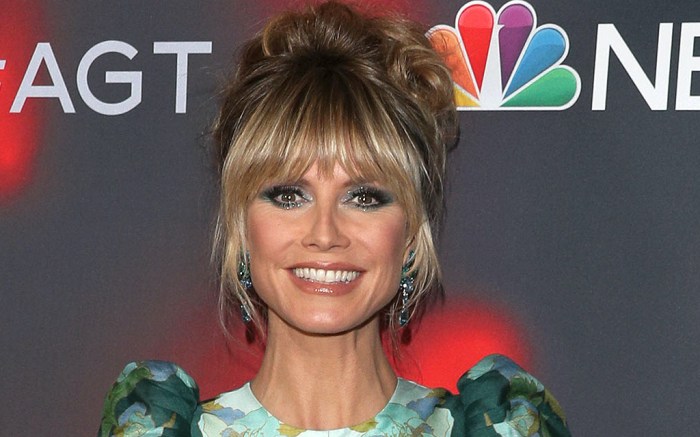 The former Victoria’s Secret Angel struck a pose in an elegant Zimmermann dress. The minidress featured a floral pattern in various hues of green, which also covered its dramatic puffed sleeves. Klum’s dress also included a keyhole torso cutout, making it both retro and sleek. The model’s look was complete with sparkling Anabela Chan rings and drop earrings.

For footwear, Klum wore a pair of pale blue suede mules by Femme LA. The Gianni style featured wide toe straps and pointed-toe soles, as well as 4.5-inch stiletto heels. Their minimalist style, as well as coordination with Klum’s nails and the blue accents in her dress, made for a smooth pairing that brought sleekness to her look. Her mules currently retail for $189.

Heeled mules are one of the season’s most popular styles, due to their ventilation and ease for slipping on and off. Pointed-toe styles have also been trending due to their sharp silhouette and ability to add a sleek air to any look. Klum isn’t the only star to slip the style on this summer; Vanessa Hudgens, Gigi Hadid and Rosie Huntington-Whiteley have also worn pairs by Franco Sarto, Bottega Veneta and Aquazzura in recent weeks.