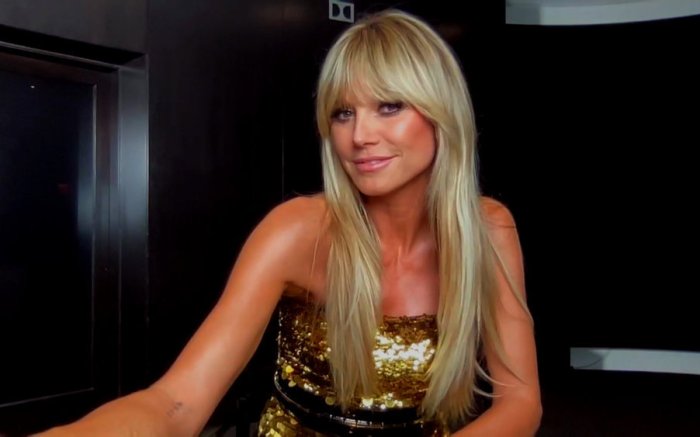 Nobody makes an entrance quite like Heidi Klum — which the supermodel proved behind-the-scenes of the latest episode of “America’s Got Talent.”

While stepping onto the “AGT” photocall, the former Victoria’s Secret Angel twirled, put her hands on her hips and beamed for the cameras in a gold sequined dress. The strapless Haney number featured a slick black belt, as well as a midi-length skirt. Klum kept her accessories minimal, wearing a pair of dangling gold earrings and a sharp red manicure to let the dress take center stage.

For footwear, Klum wore a pair of chic black heeled sandals. The shoes featured thin ankle straps and a toe strap composed of several thinner bands, plus heels that appeared to total at least 4 inches in height. Their minimalist shape and classic look allowed the dress to shine even further, while smoothly pairing with  Klum’s belt and tying the ensemble together. She wore the same outfit that same day when she appeared on “The Tonight Show Starring Jimmy Fallon.”

Heeled sandals are the latest style people are gravitating toward this season, now that in-person events have resumed. The style’s popularity and ventilation make them ideal for wearing in warmer temperatures, while bringing an elegant finish to any summer look. Stars like Keke Palmer, Tiffany Haddish and Jennifer Lopez have all worn takes on heeled sandals in recent weeks from brands like Sarah Flint, Le Silla and Bottega Veneta.

The “America’s Got Talent” judge‘s summer shoe rotation often features chic, comfortable, and utterly bohemian sandals. Klum has been spotted in styles that include thong straps, strawberry and snake prints from brands like Gucci, Femme LA, and Birkenstock. However, her fashion background extends far beyond wearing stylish shoes; the star began her career modeling for Victoria’s Secret, Sports Illustrated and Givenchy, and has even founded her own lines of intimates, swimwear, perfumes, and clothing with German grocery store Lidl.