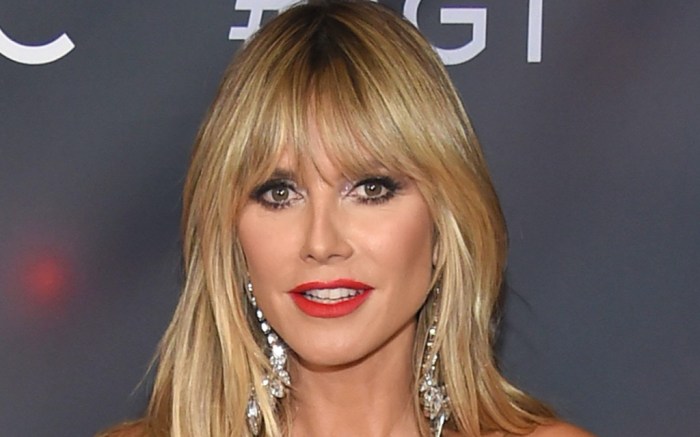 The former Victoria’s Secret Angel hit the photocall in a bold ensemble by Oscar de la Renta. Her look featured a nude netting bustier top, covered in ribbons that were topped with crystals. However, its most dramatic feature was a black tulle train, which flared as Klum strutted down the carpet. Her look was complete with sharp black trousers, as well as statement rings and large crystal drop earrings.

For footwear, Klum stepped out in a pair of high-shine sandals. The shoes featured pointed black soles, as well as heels that appeared to total at least 4 inches in height. They were complete with two thin toe straps covered in crystals — which perfectly coordinated with Klum’s bold jewelry and top.

Glamorous sandals are back in many people’s shoe rotations, now that in-person events have resumed. Many styles have featured metallic tones or crystal accents to make bold statements for a range of occasions. Klum isn’t the only celebrity to strap into a pair, either; stars like Kate Beckinsale, Beyoncé and Thandie Newton have all been spotted in similarly glamorous sandals by Aquazzura, Jimmy Choo and Alevi Milano in recent weeks.

The “America’s Got Talent” judge‘s pre-fall shoe lineup often features chic, comfortable and utterly bohemian sandals. Klum has been spotted in styles that include thong straps, strawberry and snake prints from brands like Gucci, Femme LA and Birkenstock. However, her career extends far beyond wearing fashionable shoes; the star began her career modeling for Victoria’s Secret, Sports Illustrated and Givenchy, and has even founded her own lines of intimates, swimwear, perfumes and clothing with German grocery store Lidl.

Add glamorous sandals to your next look, inspired by Heidi Klum.