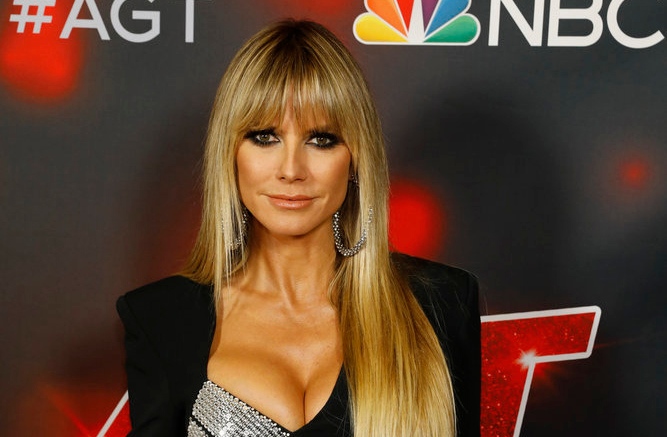 The model posed on the red carpet for the new episode of “America’s Got Talent” yesterday in Los Angeles. For the ensemble, Klum wore a black suit dress by Dolce & Gabbana that incorporated a glittery bra cup that elevated the look and gave it a sophisticated edge.

Klum’s style, both on and off camera, has an emphasis on glamour and edginess. On Instagram and red carpets alike, she wears elegant gowns from brands like Elie Saab and Valentino. When she’s not dressed to the nines for work-related events, she’s typically spotted wearing patterned sweaters, vintage-inspired clothing, flowy summer dresses, oversized suiting and sequined cocktail dresses. Her essential footwear aesthetic consists of high heels in the form of boots, pumps, wedges or sandals.

The “Germany’s Next Top Model” host is one of the biggest stars in the fashion industry. She’s modeled and had ad campaigns for brands like Jordache and Liz Claiborne. She was also a co-host on the beloved fashion design competition show “Project Runway” from 2004-2017, alongside Tim Gunn. The model paired up with Gunn again to create Amazon Prime Video’s fashion design competition show “Making The Cut.” Klum was also a Victoria’s Secret Angel for 11 years.

Put on a pair of jeweled heeled sandals and add a touch of sophisticated edge, inspired by Heidi Klum.