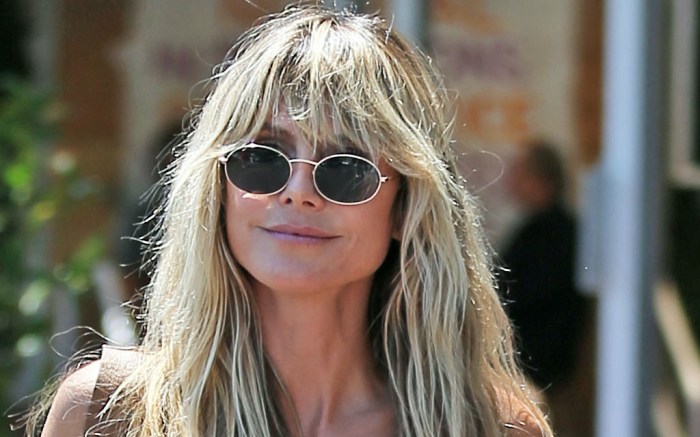 If you purchase an independently reviewed product or service through a link onÂ our website, we may receive an affiliate commission.

Heidi Klum tapped into her bohemian side for a family shopping trip in Los Angeles yesterday.

For a day of shopping and lunch with her husband Tom Kaulitz and children Leni and Lou Sulola Samuel, the “Making the Cut” host wore a simple white tank top with a matching maxi skirt, featuring floral embroidery and eyelet detailing. Accessorized with a pair of oval-shaped sunglasses, a slouchy brown tote bag, and windswept hair, Klum’s ensemble was a lesson in ’70s-inspired bohemian dressing. Klum also coordinated her look with a matching white manicure and pedicure.

Klum’s look was complete with an especially bohemian pair of sandals. The brown suede pair featured a toe and heel strap lined with puka shells, as well as laced straps that wrapped around her ankles. Finished with fringe tassels, the shoes remained chic while fully leaning into a beachy, free-spirited aesthetic.

Ankle-wrap sandals are the go-to shoe of the season. Due to their punchy look and supportive fit, the feature can be spotted across a range of heeled and flat sandals. Celebrities like Jordyn Woods, Ciara, and Kristin Cavallari have been quick to add the style to their shoe rotation this summer, wearing trendy pairs by labels like Giuseppe Zanotti and Bottega Veneta.

Klum has had a busy year so far, recently returning as a judge for the latest series of NBC talent show “America’s Got Talent.” The model also announced the renewal of Amazon Prime’s series “Making the Cut,” which she co-hosts alongside her former “Project Runway” co-star Tim Gunn. The competition series profiles rising designers and adds their winning designs to shop live every week on Amazon. Additionally, she’s served as the host and executive producer of “Germany’s Next Top Model” since 2006, and just wrapped the show’s 16th season.

Prior to her TV stardom, Klum began her career modeling for Victoria’s Secret, Sports Illustrated and Givenchy. She was notably the first German model to become a Victoria’s Secret Angel in 1999. The model has also founded her own lines of intimates, swimwear and perfumes, and even designed a fashion line for German grocery store Lidl. In her shoe rotation, Klum prefers variety, having been seen in styles from Birkenstock sandals to Christian Louboutin stilettos.

Click through the gallery for more of Heidi Klum’s best style moments over the years.