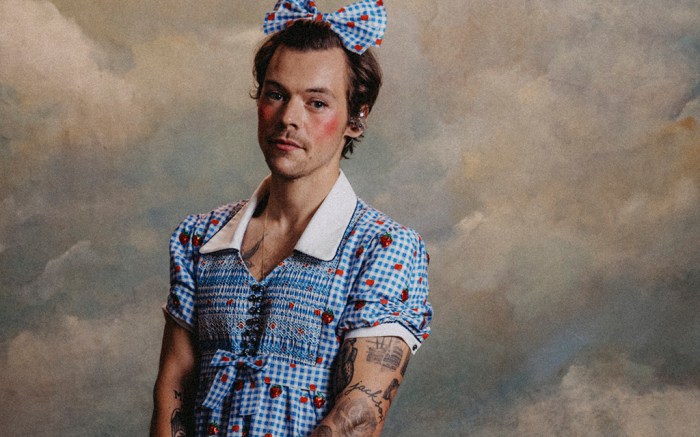 The “Watermelon Sugar” singer hit the stage in a costume directly inspired by Dorothy from “The Wizard of Oz.” Styles’ look featured a blue and white gingham minidress with a red heart print and white collar. His ensemble was complete with a matching hair bow, white bloomers and red tights—plus, of course, a Toto stuffed animal in a wicker basket.

For footwear, the former One Direction member wore custom Gucci boots specifically designed for the occasion by Alessandro Michele. The pair featured light blue leather uppers, which coordinated with his dress and mimicked Dorothy’s socks from the original film. However, their bottoms featured block heels, bow accents and rounded toes covered in red glitter. Styles’ custom ruby slippers created a fully dedicated costume, while also adding a dash of vintage glamour to his ensemble.

When it comes to fashion, Styles has become renowned for his glamorous, retro and fluid outfits. The “Dunkirk” actor frequently wears Gucci, as he’s one of the luxury label’s campaign stars, but also wears bold knits, jackets and sets from Marc Jacobs, J.W. Anderson, Lanvin and Bode. His onstage costume often include sparkly pieces from independent designers like Archie Alled-Martínez and Harris Reed. When it comes to footwear, Gucci loafers and boots are his go-to shoes of choice. London brand Roker has also outfitted him. When off-duty, Styles typically wears athletic or slip-on sneakers by Nike, Adidas, Vans and New Balance.

Click through the gallery to see Styles’ boldest outfits over the years.