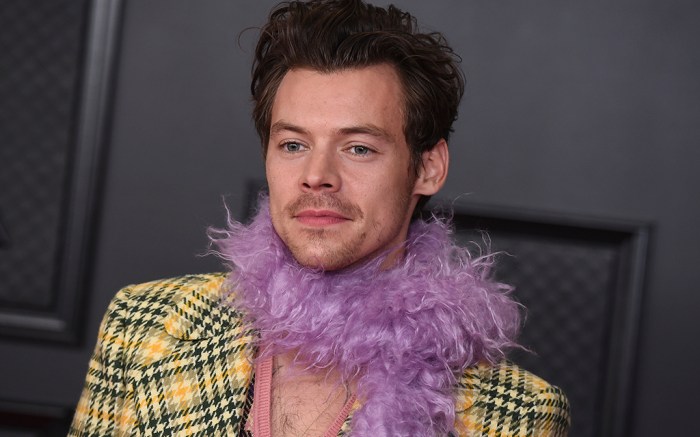 Harry Styles is back on tour and his concert outfits have taken over TikTok. The star embarked on his second solo tour in September with “Love On Tour,” performing hits off his 2019 album “Fine Line,” and fans are flooding the video app with hundreds of clips from the show.

In the videos, you can see Styles onstage in a range of custom looks, all created by creative director Alessandro Michele and Gucci, that they just can’t get enough of. Many are also recreating his flamboyant, retro aesthetic for their own outfits when attending the shows.

“Harry Styles or ’70s fashion show,” one user wrote on TikTok as she scanned the crowd of fans at a recent concert.

In early September, stylist Harry Lambert took to Instagram to tease one of Styles’ outfits from tour featuring a sparkling fringed red vest, matching red flared trousers and beige heeled boots that have since become a TikTok staple. Styles, of course, goes shirtless in this look during the show.

In another outfit, Styles sports a baby blue, lace and sequined button-down shirt paired with matching pants with suspenders by Gucci.

Throughout the tour, Styles has updated his stage outfits to include a chic cream-colored ensemble complete in satin silk. “Shimmied his suspender right off,” one fan posted the look on TikTok.

shimmied his suspender right off ! i apologize in advance if all i do from now on is edit this clip to different audios. actually i’m not sorry. #harrystyles #tpwk #hslot #hslotdallas #harrystylesvids

And for his most eccentric look of all — that gives major Elton John vibes — Styles is seen wearing a glam-rock-inspired suit with dramatic feather sleeves and high-waisted pants. Plus, he accessorizes with heart-shaped, rose-colored sunglasses.

wait for it #harrystyles

Next up, the “Falling” singer has two special tour dates to celebrate Halloween on Oct. 30 and 31 at Madison Square Garden in New York. Titled, the “Harryween Fancy Dress Party,” fans are sure to get in the spirit as will Styles.

To see more of Harry styles fashion evolution through the years, click through the gallery.