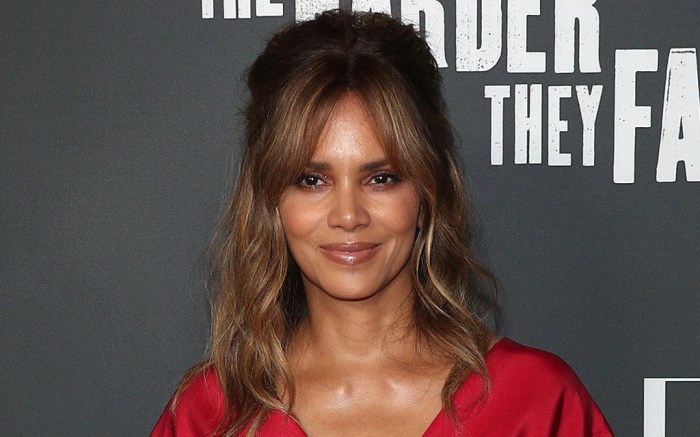 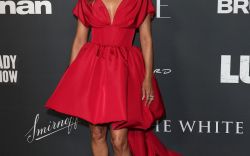 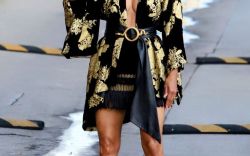 Halle Berry was in the holiday spirit while baking in a festive apron this week.

The “Bruised” star donned an apron lined in red and white stripes on Instagram today. The tan baking cover-up featured a face, bowtie and buttons to appear similar to a gingerbread man. Berry kept the res of her baking outfit casual, consisting of a delicate gold necklace, cuffed blue jeans and a black T-shirt.

For footwear, the “Monster’s Ball” actress appeared to wear a pair of combat boots with black leather uppers. The lace-up style, though its front weren’t included in the shot, likely featured rounded toes and ridged platform soles. The pair brought an edginess to Berry’s otherwise casual look, and made a humorous pairing with her festive attire.

Combat boots are a top trend for the fall and winter seasons, due to their edgy nature and ability to bring a utilitarian punch to any look. Most styles feature neutral leather uppers with ridged soles. In addition to Berry, stars like Venus Williams, Jennifer Lawrence and Kelly Clarkson have also worn pairs by Prada, Legree and Christian Louboutin in recent weeks.

When it comes to shoes, the “Perfect Stranger” star often wears high-heeled sandals in platform or stiletto silhouettes on the red carpet, hailing from top brands like Jimmy Choo, Sophia Webster and Stella Luna. Pointed-toe pumps from Christian Louboutin have also been a revolving part of her shoe rotation over the years. When off-duty, Berry can regularly be spotted in Adidas and Under Armour sneakers, as well as Nike slides.

Click through the gallery to see Berry’s sleek shoe evolution over the years.

Lace up this season in combat boots.