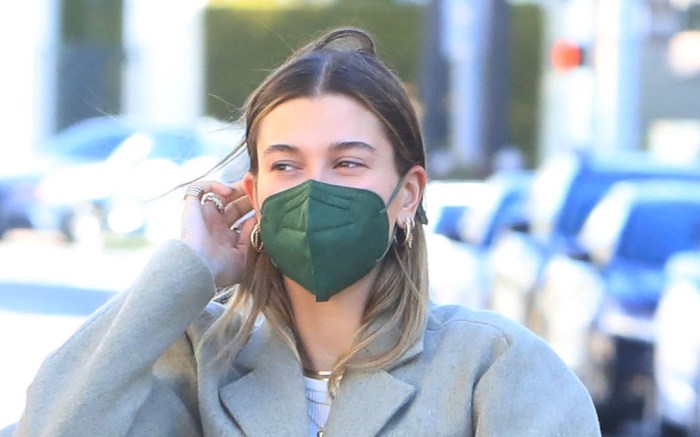 Hailey Baldwin is the queen of dressing up cozy basics.

While out with husband Justin Bieber on Saturday, the model wore a $3,560 Bottega Veneta wool coat and a white tee underneath. She teamed the outerwear piece with the Tauro Pants from Baserange in a coordinating lighter hue. To accessorize the outfit, Baldwin chose the $3,200 Bottega Veneta The Pouch Intrecciato clutch bag in the black colorway, a Kaze face mask in her go-to forest pine green shade, white crew socks and gold jewelry.

For footwear, the 24-year-old completed her daytime look with a pair of Nike Dunk Low “Ceramic” sneakers. These buzzy shoes were re-released last November, following their original debut in 2001 as part of the brand’s Japan-exclusive “Ugly Duckling Pack.” The color-blocked sneakers feature orange, black and white suede uppers with a signature Swoosh logo on the sides and branded detailing on the tongue and insoles. They currently retail between $295 and $1,029 in limited quantities on farfetch.com.

Baldwin has long proved her affinity for Nike footwear. This year, the runway model has further confirmed her signature street style aesthetic, and regularly shares this easy styling hack to elevate her favorite cozy pants. In February, the social media personality wore a similar pair of knit pants in a light neutral hue from Danielle Guizio and paired them with a tan shacket and Nike Air Force 1 ’07 sneakers.

While these iconic all-white sneakers remain her most worn pair, Baldwin has often been spotted in other Nike models, including the SB Dunk and Air Jordan 1 Retro.

Embrace the model’s colorful footwear aesthetic with these similar options available below.

Click through this gallery to see more of Hailey Baldwin’s on-trend sneaker style.