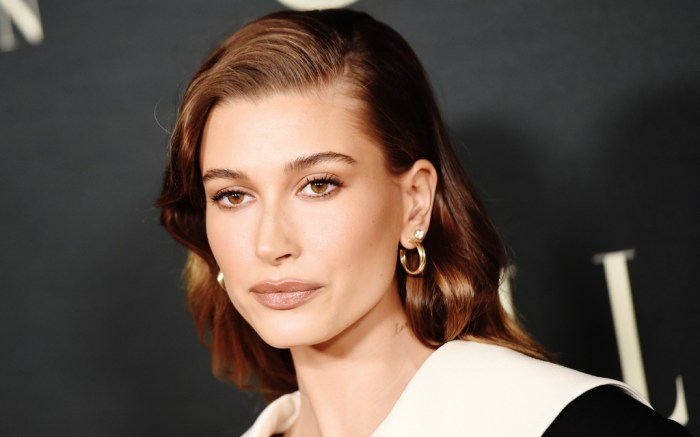 The star is captured combining sweater weather and Superga boots with summery bikini bottoms on the beach. The 24-year-old modeled a pair of white Superga 799 Rubber boots which feature the Superga logo lettering down the shaft with a black tab sticking out at the top as well as a thick sole and a one-inch heel.

The boots are paired with a polka dot bathing suit as well as a striped blue, white and black striped sweater.

The media personality announced in March that she was teaming up with Superga as their newest global ambassador. In the campaign, Bieber is seen in a simple, white button-down shirt which she wears as a dress along with a pair of the classic 2630 Stripe total white fabric sneaker. In other shots, she is wearing pinstriped trousers with black sneakers and a gray hoodie with the 2341-Alpina Cotu White shoes.

In their announcement post, Superga noted that “Spring/Summer 2021 is approaching and Hailey perfectly embodies the most authentic and joyful spirit of the brand.”

The model’s own experience in the fashion industry extends to all sides. For example, the media personality worked with Levi’s to star in their summer ’20 campaign alongside Jaden Smith and most recently joined the denim brand for its annual 501 Day event. She has also appeared in marketing campaigns for brands such as Guess, Zadig & Voltaire, Ralph Lauren and Tommy Hilfiger.

The influencer is known for her street style. When off the clock, she is typically very on-trend and tends to sport oversized clothing with sneakers or boots. At the top of her go-to list is usually her Nike Air Force 1 sneakers as well as New Balance and Reebok.

She has been spotted wearing sneakers from Chanel, Off-White and Nike x Fear of God collabs, as well as heels from Tabitha Simmons and Jimmy Choo.

See more of Hailey Bieber’s style through the years.