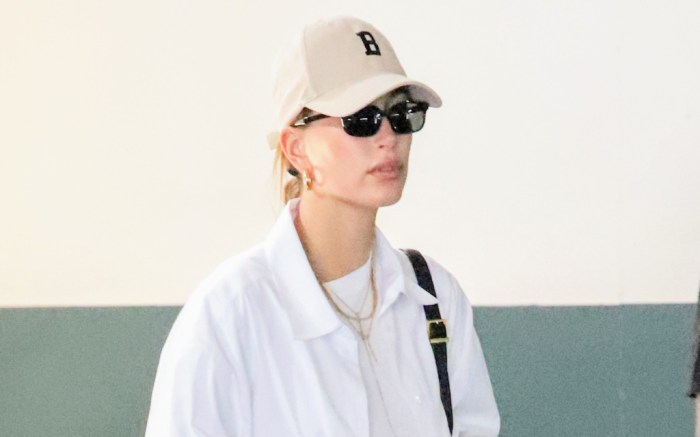 Hailey Baldwin did her own take on retro casual style yesterday while on a trip to New York. In Bedford, the model wore a white T-shirt and gym shorts with an oversized white button-down shirt. Her accessories included a beige baseball cap embroidered with a “B” logo, sunglasses, black leather shoulder bag, and delicate gold jewelry—plus a green smoothie, one of the Tom Ford Beauty face’s favorites.

The Versace model’s ensemble seemed inspired by ’90s airport style, which has been making a comeback as a fashion inspiration within the last year. Casual ensembles elevated by accents like minimalist jewelry, hats, and handbags have been trending, layered with pieces similar to their ’90s counterparts like vests, oversized shirts, and blazers. Stars like Kendall Jenner and Bella and Gigi Hadid have been seen in similar ensembles when traveling—even sans airplane—proving the look’s versatility over time.

Baldwin tapped New Balance for a pair of chunky retro sneakers, which she wore over white socks—another facet of vintage style. The black and white kicks are similar to chunky styles that have also been seen on stars like Alessandra Ambrosio and Jennifer Lopez, featuring mesh and leather uppers with thick laces and exaggerated soles that add a sporty element to any ensemble. Though Baldwin’s pair appears to be out of stock, a similar pair of 624 sneakers retails for $75 on NewBalance.com.

This isn’t Baldwin’s first foray into the sneaker world. The model frequently veers towards vintage and hypebeast-worthy styles, most recently wearing Nike’s orange “Ceramic” sneakers for a juice run.

Baldwin has had an especially fashionable year so far, starring in Versace’s spring 2021 campaign. While working with stylist Maeve Reilly, she’s also become a fixture on the street style scene, known for wearing a mix of athleisure and statement pieces by top brands like Bottega Veneta and Saint Laurent. The previous FNAA recipient has also starred in campaigns for Levi’s, Guess, Tommy Hilfiger and Ralph Lauren throughout her career.

Baldwin’s shoe rotation is also wide-ranging, from feminine to hypebeast. Sneakers are a frequent go-to for the model, who often wears Nike’s Air Force 1 sneakers but also sports Chanel, Off-White, and Nike x Fear of God kicks. On the formal front, she’s known to wear strappy sandals, mules and sleek pumps by Jimmy Choo, Tabitha Simmons, and Balenciaga. Of course, her go-to brand as of late is Bottega Veneta, which has been crafting colorful and architectural bags, shoes and outerwear that every “it” girl is coveting at the moment.

Add retro vibes to your look with chunky sneakers inspired by Hailey Baldwin.